'Shades of Our Sisters' flips the focus from tragedy to celebration

The thesis project by a group of Ryerson film students, including Sault Ste. Marie's Adam Gualtieri, aims to humanize the troubling issue of missing and murdered Indigenous women
0
Feb 16, 2017 6:14 PM By: Donna Hopper 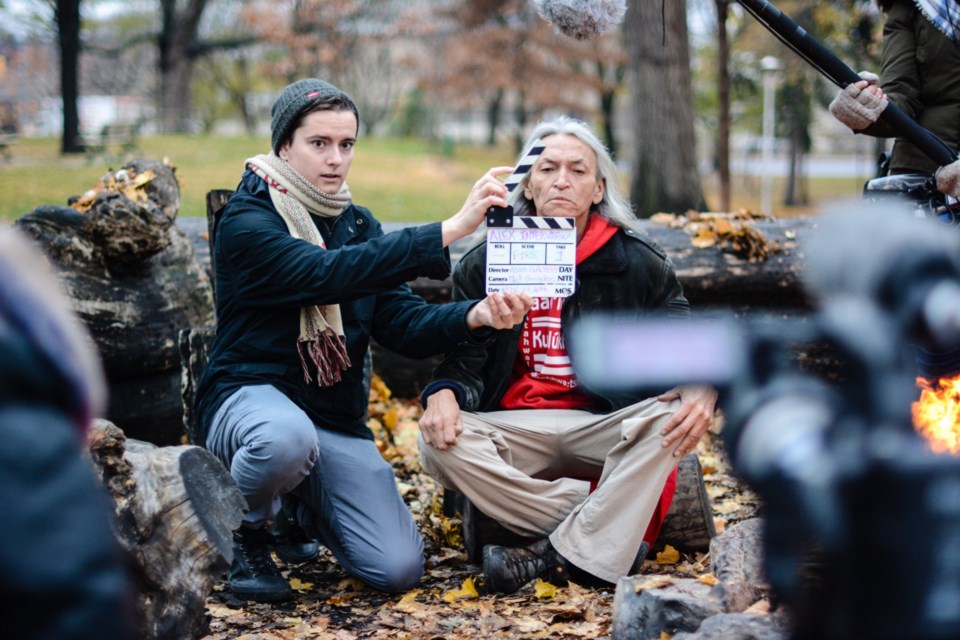 'Shades of Our Sisters' Director of Photography Adam Gualtieri and Alex Cywink, brother of Sonya Cywink, on location. Alex chose to do his final interview at Dufferin Park where he set up a sacred fire and spoke about growing up with his sister. Photo provided

Sonya Cywink of Whitefish River First Nation and Patricia Carpenter of Alderville First Nations are part of a large group of Canadian women – a group that unfortunately continues to grow. They’re counted among the more than 1,200 missing and murdered Indigenous women, girls, transgender and two-spirited individuals.

In 1994 at age 31, Sonya was found dead in Elgin County. In 1992, Patricia Carpenter, a new mother at 14 years old, was found at a construction site in downtown Toronto. Sonya’s murder remains unsolved while Patricia’s death was considered ‘undetermined’ by police.

But Sonya and Patricia are more than statistics, and a thesis project by a group of Ryerson film students aims to humanize the troubling issue of missing and murdered Indigenous women. Shades of Our Sisters is an interactive exhibit of film, soundscapes, and the victims’ personal artifacts that flip the focus from tragedy to celebration.

“The whole goal of this project was to basically do the exact opposite of what traditional main stream media has been doing for the whole narrative of murdered and missing Indigenous women and girls. We, instead of focusing on how these women died, we’re focusing on how they lived and how they were loved and how they loved,” explained the project’s Director of Photography Adam Gualtieri in a recent phone interview.

Born and raised in Sault Ste. Marie, Gualtieri is one of eight fourth-year Ryerson students involved in the creation and production of Shades of Our Sisters. And what sets this documentary project apart, he said, is the direct involvement of the Cywink and Carpenter families.

“The most important part of this project is that it’s co-created and collaborative with the Indigenous families. The family members of the murdered Indigenous women are the producers of the project. That’s what really makes this innovative,” said Gualtieri.

“We’ve challenged the structure of documentary filmmaking. Rule number one is that you aren’t supposed to let your subject participate in the creation of your piece. It creates a bias,” he continued. “But by collaborating and co-creating with these families… it has totally challenged any prior notions to documentary making that I had. It’s been challenging in that sense, but it’s definitely been really rewarding, too. Through that process, we’ve become that much closer to them. They’re not just a subject to us. They’re family to us.”

Shades of Our Sisters began as a third-year short documentary assignment on Sonya Cywink approximately 18 months ago. After meeting with the Carpenter family last spring, the students behind the project had a very specific vision for the assignment, never wanting to focus on how the women died, Gualtieri said.

“The project has become way bigger than we ever envisioned it to be in the sense that it’s been such a powerful and emotional journey because we have become so close to these two families,” he said. “We built relationships that I think really transcend the initial purpose of the project. They’re life-long friends to us now. They call us their kids.”

Shades of Our Sisters opens at Ryerson University on Friday, Feb. 17 and will remain on campus until Sunday, Feb. 19. The exhibit will then be on display at the Alderville Community Centre on Feb. 21 and 22 before moving to Espanola High School on Feb. 24 and 25.

The Ryerson team as well as the Cywink and Carpenter families want visitors to the exhibit to see the human side of these two women, to hear their voice, and understand that they’re more than just a statistic, Gualtieri said.

“It doesn’t matter what lifestyle they lived, or what they were involved with leading up to their deaths,” he explained. “They had a life and they loved people and they were loved so much. They’re still loved. I want people to just attend this exhibit and experience the lives of two women. If we could have done it for 1,200, we would have. But for now, it’s these two, and we want people to get to know them. Hopefully it fuels the fire behind ending violence against women.”

The group behind Shades of Our Sisters is open to touring the exhibit across the country. While the logistics behind and cost of doing so can be prohibitive, Gualtieri said, other communities have already expressed interest in hosting the exhibit, including Sudbury.

“We definitely expect, want, and we will make this project live well beyond the completion of our school project,” he said.

To learn more about Sonya Cywink, Patricia Carpenter, and the Shades of Our Sisters project, please click here.