Loyal SooToday.com reader, Joe Marinich, submitted this photo of the recovery of a sunken tug boat on the St. Marys River. The vessel, Hammond Bay , is owned by the U.S.
0
Jul 4, 2013 1:07 PM By: SooToday Staff 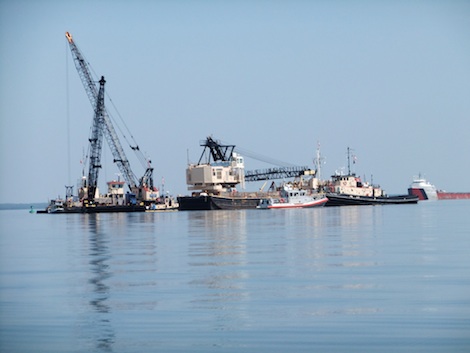 Loyal SooToday.com reader, Joe Marinich, submitted this photo of the recovery of a sunken tug boat on the St. Marys River.

The vessel, Hammond Bay, is owned by the U.S. Army Corps of Engineers and was being towed along with three barges when it became lost Monday morning.

No one was aboard the Hammond Bay when it sunk.

Coast Guard reports there was no environmental impact

The cause of the sinking of the tug is unknown and under investigation.

The tug was lifted out of the water by the crane barge Harvey as traffic along the St. Marys River remained open.

However, the Coast Guard continually enforced a 500-foot safety zone until the Hammond Bay had been successfully refloated.

After being refloated and dewatered, the Hammond Bay was towed to Sault Ste. Marie for repairs.

"The successful refloating of the Hammond Bay was a great example of the value of a continued partnership between the Coast Guard and Army Corps of Engineers," said Cmdr. Nicholas Wong, chief of prevention at Coast Guard Sector Sault Ste. Marie. “Strong communication between the two organizations resulted in a successful operation that caused minimal impact to the waterway and its users. Although there were no pollution hazards, the Coast Guard was ready to respond if needed."

A Canadian official was also on scene during the salvage operation as part of the Canada-United States Joint Marine Pollution Contingency Plan.

This plan ensures there is an effective joint U.S./Canada coordinated response during cross-border pollution incidents.

The salvage operation took about four hours to complete.