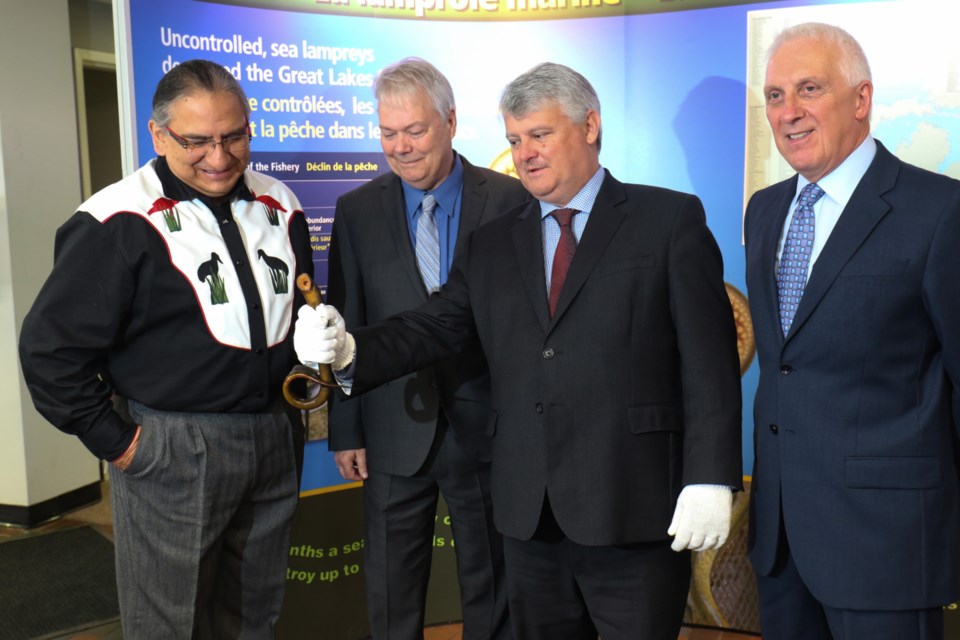 The federal government will give the Sea Lamprey Control Centre $8.7 million over five years, with an annual increase of $2.5 million to the Great Lakes Fisheries Commission (GLFC) for its sea lamprey control assessment and research.

As a result of Wednesday morning’s funding announcement, the Sea Lamprey Control Centre says that it will hire more staff in order to suppress larvae sea lamprey in deep water areas using lampricides, then perform research on the lampricides’ effectiveness.

“It’s very exciting news for us, because we’ll be able to hire staff and marshall resources toward very specific challenges that we’re dealing with, namely sea lamprey larval populations that exist in deep water areas like the St. Mary’s River,” said Department of Fisheries and Oceans division manager Paul Sullivan. “As well, we be able to invest more money into assessment and control of sea lamprey across Great Lakes.”

A portion of the funding will also go toward the upgrading of dams and barriers that help mitigate the invasion of sea lamprey. Sault Ste. Marie Liberal MP Terry Sheehan says that the federal government began to fund the upgrade of dams and barriers back in 2016, when it dished out $8 million over two years in order to replace some of the aging infrastructure.

Meanwhile, the increase in funding for the GLFC will help both Canada and the United States conduct new research into controlling sea lamprey and other invasive species.

“We’ll be able to provide additional funds to the Great Lakes Fisheries Commission so that they can conduct research into new methodologies for sea lamprey control as well as coordinate other fishery research and the management of fisheries in the Great Lakes,” Sullivan said.

Among the newer methods for lamprey control being researched are natural attractants and repellents that could be used to direct sea lamprey into traps, or repel them from streams where they can reproduce.

Another method that’s being looked at is the use of what’s being called ‘selective fish passage,’ using dams to filter out sea lamprey.

“Obviously there are native fish species that use tributaries to spawn in, just like sea lampreys,” Sullivan said. “Dams also prevent them from reaching their spawning habitat, so if we can selectively pass the fish at these barriers while removing the sea lamprey, that would be a big boon for fishery rehabilitation as well as sea lamprey control.”

The sea lamprey was first discovered in Lake Ontario in the early 1800s, and by 1950 had carried out considerable damage to fish populations in the Great Lakes, according to the government of Canada.