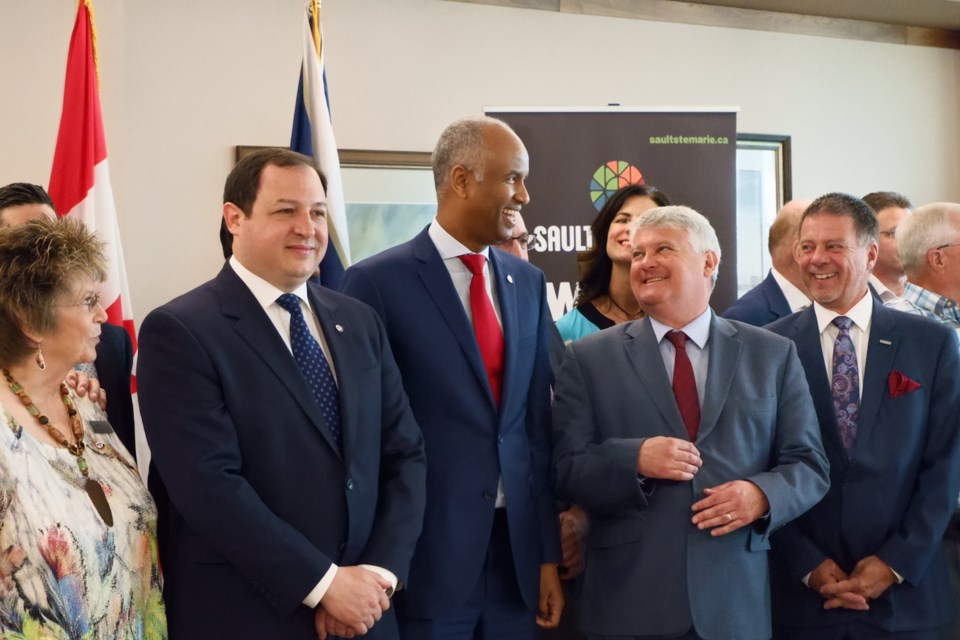 Mayor Christian Provenzano, Ahmed Hussen, Minister of Immigration, Refugees and Citizenship, and MP Terry Sheehan are pictured together at June, 2019 announcement that Sault Ste. Marie will be one of 11 cities to be part of a new immigration experiment. Donna Hopper/SooToday

Interestingly, Mayor Provenzano's successful push to get the Sault included in a new federal immigration pilot project was favourably noticed by S&P.

"The City of Sault Ste. Marie will demonstrate healthy operating balances and after-capital surpluses, on average, in the outlook horizon, indicating an improvement from our last review," the company said in its latest update, issued last week. "A robust liquidity position will allow the city to advance its capital program while maintaining a very low debt burden through 2021."

With more than 150 years of experience, S&P Global is the world's leading provider of credit ratings, employing 1,500 analysts in 128 countries.

A good credit report can increase the city's access to new financial markets.

"Sault Ste. Marie's challenging demographic profile limits the city's growth prospects and might affect its revenue-generating capability, in our view," the company said.

"Its population has been on a declining trend, and, as in the past, those age 55 and over-represent more than 25 per cent of the total estimated population. However, the city has been selected as part of the Rural and Northern Immigration Pilot, a federal government project to help smaller rural and northern communities attract and retain foreign skilled workers to meet their economic development and labour market needs."

"This could be positive for the city's long-term economic prospects and we will monitor its development," S&P remarked.

"The increase in the credit rating... will assist in the city’s ability to obtain long-term debt at competitive rates," said Shelley Schell, the city's chief financial officer and treasurer, adding that "the rating outlook as 'stable' means that the rating is not likely to change in the next two years."

"Although the city continues to gradually diversify away from its traditional resource-based economy, we believe that medium-term economic and related GDP [gross domestic product] growth will remain muted relative to that of Canada. While its GDP per capita is not available, we estimate it to be somewhat below the national average based on the city's income levels."

"In our view, Sault Ste. Marie demonstrates satisfactory financial management. Disclosure and transparency are what we characterize as good, and the city prepares one-year operating and capital budgets annually, with a four-year capital forecast. Senior staff is experienced, and we believe that debt and liquidity management is prudent. The city is updating its investment policy this year and plans to introduce a debt and capital financing policy in 2020."

The credit analyst noted that the city guarantees $5.9 million in debt for the municipally-owned Public Utilities Commission.

"We do not consider the debt of Sault Ste. Marie's government-related entities, PUC Inc. and PUC Services Inc., as a contingent liability, because we believe the likelihood of the city providing extraordinary support in a stress scenario is low."

Each year, the city pays S&P Global Ratings about $20,000 to prepare a forward-looking opinion of its creditworthiness.

Last month, the return we get on that investment was discussed by the city's finance committee.

Ward 2 Coun. Lisa Vezeau-Allen suggested issuing a request for proposals for the annual contract, for purposes of transparency and "just because of the amount."