City staff scrambled to get the new Manzzutti memorial plaque under wraps when our photographer showed up Wednesday at Roberta Bondar Marina, but the pestilent fellow insisted on snapping this picture anyway.
Aug 8, 2002 1:00 AM By: David Helwig 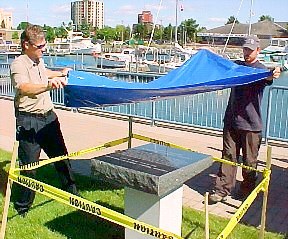 City staff scrambled to get the new Manzzutti memorial plaque under wraps when our photographer showed up Wednesday at Roberta Bondar Marina, but the pestilent fellow insisted on snapping this picture anyway.

No one was supposed to see the plaque until it was unveiled at an 11 a.m. ceremony on Thursday organized by the City's Community Services Department and the Sault Ste. Marie Chamber of Commerce.

The event was the dedication ceremony for the marina's Captain "Skipper" Manzzutti Welcome Centre.

Manzzutti was declared Sault Ste. Marie's Man of the Year in 1958.

He was also one of just three Canadians ever elected to the American Board of Shipping.

Here's the full text of a fact sheet prepared by the City about this exemplary Saultite:

Feleciano (Frank) Manzzutti was born in Udine, Italy on July 27, 1910 and immigrated with his mother to Canada two years later, joining his father who had previously settled in Sault Ste. Marie, Ontario.

Frank's distinguished marine career began at A. B. McLean in Sault Ste. Marie shortly after his high school graduation.

Later, he worked on the sand ships of the Cadwell Sand and Gravel Company in Windsor, Ontario.

By 1936, he was sailing for Canada Steamship Lines on the passenger ships of the upper Great Lakes.

In 1946, Captain Manzzutti founded his own company, Manzzutti Enterprises, in Sault Ste. Marie, Ontario, operating the steamer ship the Yankcanuck.

The "Skipper," as he was affectionately called, was well known for his love of sailing and for his community service.

He was active in his church and in many community organizations, including the Boy Scouts, the Sault Ste. Marie Sea Cadets, and the Navy League, becoming an Honourary Life Member in 1972.

In 1958, Sault Ste. Marie recognized "Skipper" Manzzutti as its Man of the Year.

Five years later he became one of only three Canadians ever elected to the American Bureau of Shipping.

In 1967, the "Skipper" was awarded Canada's Centennial Medal.

Captain Manzzutti died of heart failure on July 14, 2000 in his 89th year, still doing what he loved best, giving of himself to his community and to his love of the lakes.

The "Skipper" died while working at the Roberta Bondar Dock.

He was acting as a marine agent for a cruise ship company, welcoming a ship as it was docking in Sault Ste. Marie.

In recognition of his contribution to Sault Ste. Marie and to shipping in the Great Lakes, the Sault Ste. Marie City Council on May 28, 2001 approved naming the kiosk at the Roberta Bondar Marina the Captain (Skipper) Manzzutti Welcome Centre.