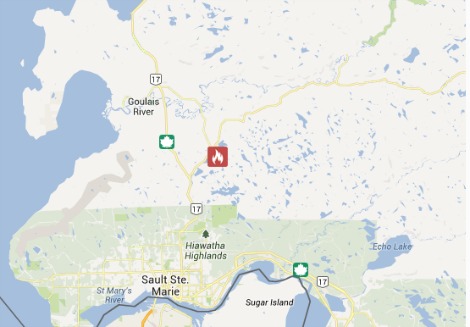 There are now 14 active fires in the region.

No issues are expected with any of the on-going fires.

A total of three new fires occurred in the Northeast Region on Sunday July 7.

Cochrane  19 is a 50 hectare fire located approximately 60 kilometres southwest of the  Victor Mine site in Cochrane.

This fire was ignited by a lightning strike and is being kept under observation.

The other two new fires on Sunday were Parry Sound 19 and North Bay 5.

Both were 0.1 hectare human-caused fires that have since been extinguished.

As of 4 p.m. on Monday July 8, two new fires had been confirmed in the region.

Cochrane 20 and Cochrane 21 are both lightning-caused fires that are 0.6 and 0.1 hectares in size respectively.

Several large wildfires are still burning in northern Quebec. Depending on wind and weather patterns, smoke from fires in Quebec may enter northeastern Ontario.

If, however, you see a large column of dark-coloured smoke and/or open flame, please call 310-FIRE (3473) north of the French and Mattawa Rivers.  In southern Ontario, call 911.

The fire hazard has begun to moderate as a low pressure weather system takes hold across much of the region.

With rain and cloud forecast, fire activity is anticipated to remain light for the next several days.