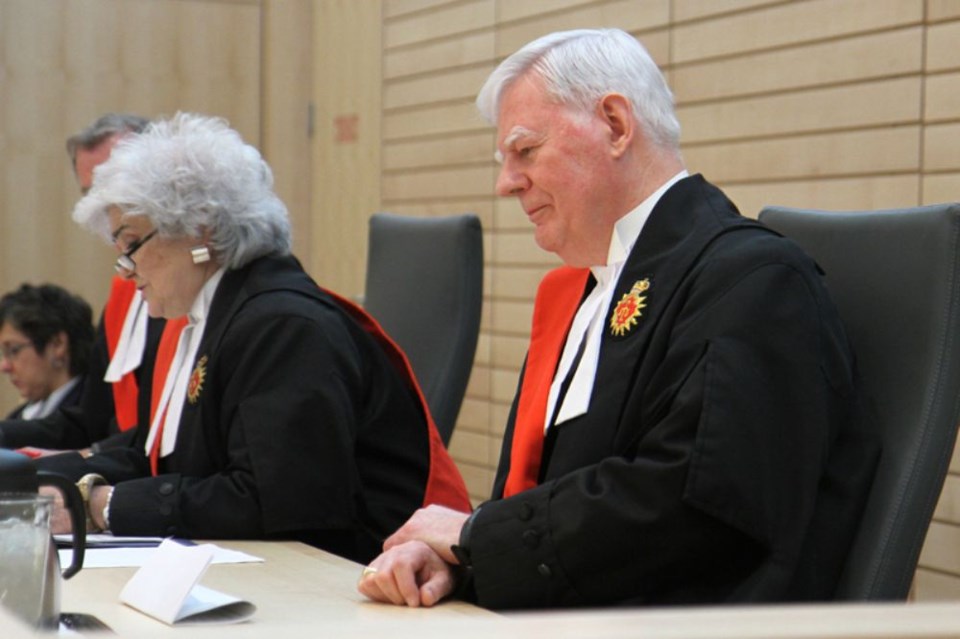 A swearing-out ceremony was held in 2015 for Justice John Wright (right) at the Thunder Bay Courthouse. (Jodi Lundmark, tbnewswatch.com)

Wright was a Sault Ste. Marie native, who, after first practicing law in Sault Ste. Marie, was appointed to the District Court of Ontario in Thunder Bay in the mid-1980s.

Wright died June 30 of cancer, surrounded by his wife and family at home in Thunder Bay.

“Superior Court Justice John Wright was a true gentleman to all he encountered. Every year, even after his retirement, he would attend the open house here at the Thunder Bay Courthouse. He would gladly share all his knowledge with local students and members of the public. He was a true enthusiast of local legal history and trivia. He had amassed a large collection of both which he proudly shared with all,” wrote Bill Baxter, a citizen journalist with the Thunder Bay Courthouse – Inside Edition page, in a reply to SooToday.

“He was a humble man despite his stature as a Superior Court Justice. He was an absolute pleasure to speak with in the hallways of the courthouse. He will be missed by all here at the Thunder Bay Courthouse,” Baxter wrote.

Wright graduated from the University of Western Ontario in 1962 before studying law at Osgoode Hall. In 1967, he began practising law in Sault Ste. Marie with the Wishart Law Firm, later appointed a Queen's Counsel in 1978.

In 1985 he was appointed to the District Court of Ontario in Thunder Bay.

A notable trial over which Wright presided came in 2015, when John Harry Tsekouras was sentenced to nine-and-a-half years in prison for trafficking cocaine and marijuana.

Wright allowed texts from a Blackberry seized by police when Tsekouras was arrested to be used in court.

It was ruled there had been charter breaches and that the phone had been unlawfully seized, retained and searched but still allowed the evidence in court.

The conviction of Tsekouras was later upheld by the Supreme Court of Canada.

Wright retired as a Superior Court Justice in 2015 when he turned 75, that being the retirement age for Ontario judges, after a 50-year law career.

Saultites will remember Wright as the son of Anglican Archbishop William L. Wright and Margaret Clare Wright, highly involved in his church and the community.

He taught Sunday School, was the Anglican Diocese of Algoma registrar for two years, its chancellor for six years, and a member of the Corporation of Trinity College for 10 years.

Wright also served as a board member and president of the Algoma District Children's Aid Society and a registered adult member of the Boy Scouts of Canada for 30 years.

Wright held the rank of Captain in the Canadian Forces (Reserve). He was an honourary member of the 49th Field Regiment RCA and served on the unit’s Senate. He also served on the Senate of the Lake Superior Scottish Regiment and served as Honourary Colonel of that regiment.

Wright wrote over 200 newspaper articles on law as well as books on his family's history.

A private funeral will be held at St. Michael's and All Angels Anglican Church in Thunder Bay on Monday, July 6.