As outdoor temperatures climbed toward an expected high of 27 degrees Celsius, Terry Sheehan stood in front of a Wardlaw gas fireplace and turned up the heat on the People's Republic of China
Jun 27, 2019 7:45 PM By: David Helwig 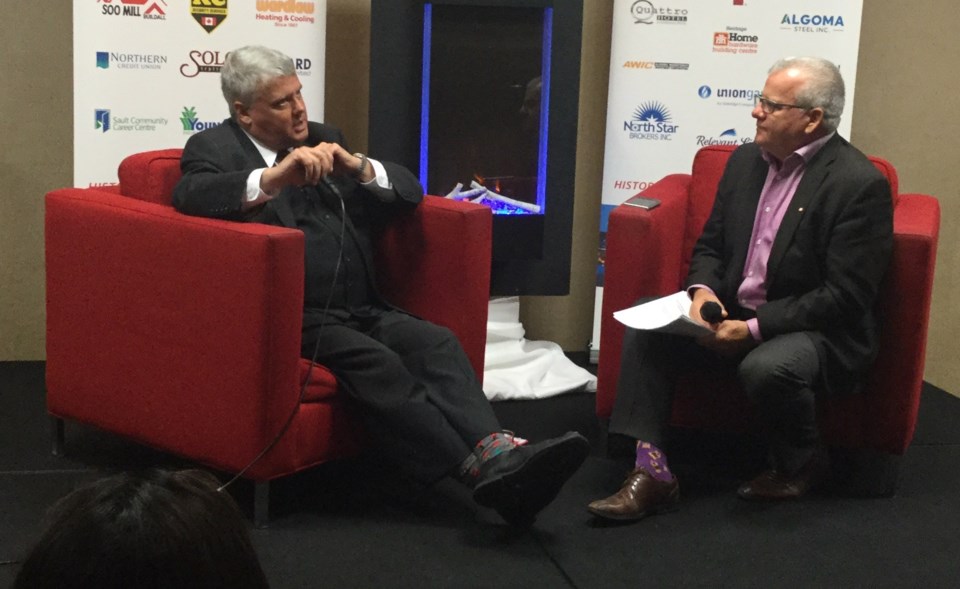 "I've been dealing with China for a very long time now," Sheehan told his annual Fireside Chat luncheon this afternoon with members of Sault Ste. Marie Chamber of Commerce.

"They're the worst culprits at dumping steel. China has one foot in one door and one foot in another door. It makes it very unpredictable," the Liberal politician said.

"They try and be very capitalistic in a lot of ways. And they are."

"But then they're a lot – the old command, centralized-type leadership," Sheehan said, speaking to the chamber's chief executive officer Rory Ring in front of a gas fireplace helpfully supplied by Wardlaw Heating and Cooling as outdoor temperatures climbed toward an expected high of 27 degrees Celsius.

"What is going on?" Ring asked the Sault MP.

"We're stuck in the middle between the U.S. and China. What can we do? We've got to get ourselves out of this," Ring demanded.

"We've worked very hard in stopping the dumping. We've implemented a number of items that stopped the dumping of Chinese steel," Sheehan responded.

"I'm on the trade committee and the economic commitee. We've had testimony and China has went into a war with the United States, a trade war."

"It highlights why we need these new trade agreements – the [Comprehensive and Progressive Agreement for Trans-Pacific Partnership] which is with Japan – the second-largest user of canola," Sheehan said.

Ring shot back: "The agreements are great. But unless you can enforce the challenges.... We're seeing it again with pork producers now under threat... How do we enforce them and make sure that we're being recognized as a tough country to deal with on the trade front?"

"We employ scientific evidence to refute the Chinese canola and beef [positions]. We're going to use science and prove our case when necessry," Sheehan responded.

"Canada is a small country but we punch way above our weight," the MP said,

"I'm not afraid of China. We will deal with them. It's a very serious issue. We need to stand up to them and continue to make sure they recognize that they need us as much as we need them."

At the beginning of this afternoon's event, Sheehan announced a $2.6-million federal contribution to a Sault-based company.