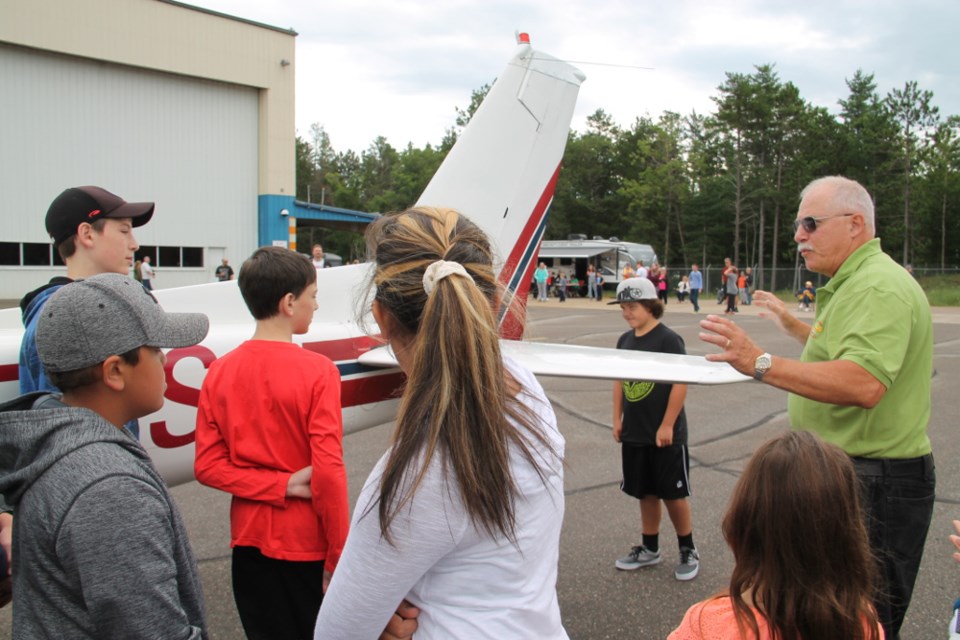 Gilbert Belair, one of two Sault men who died in a plane crash in Sault, Michigan May 5, 2018, is shown at far right explaining flight to children and youth at the third annual COPA for Kids event, held at the MNRF hangar beside the Sault Ste. Marie Airport, Aug. 12, 2017. Darren Taylor/SooToday

Although the identities of the deceased in the crash have not been officially released, family and friends have confirmed that pilot Gilbert Belair, 67, and passenger John Paul Finck, 76, died when Belair’s registered homebuilt aircraft crashed at Sanderson Municipal Airport in Sault Ste. Marie Mich. Saturday morning.

“When I heard, I nearly fainted. I was shocked. Totally shocked. We were out for coffee Wednesday night, that’s the last time I saw him,” said the Sault’s David West, a friend of Belair’s.

“He would do anything for anybody. He did a lot of work for people. If you needed a hand with something he’d be the first guy to come and say ‘what can I do for you?’”

He was also very active with West in the Gospel Hall, his church located at the corner of Spring and Wellington Streets.

“It makes you think of your own mortality…(but) I have faith, I know where he is and he’s better off, but I’m thinking of his wife and family,” West said.

In a twist of tragic irony, West and his son-in-law towed John Paul Finck’s own plane to shore after it flipped over in the area of the St. Marys River near Bell's Point Campground in Aug. 2016

Finck made it to shore after sustaining minor injuries in that incident.

Belair’s plane “stalled and nose dived to the ground near the runway,” wrote Tony Molinaro, a US Federal Aviation Administration (FAA) spokesperson, in an email to SooToday Saturday.

“The NTSB (National Transportation Safety Board) will lead the investigation," Molinaro wrote.

Sanderson airfield was closed until further notice, and was expected to be closed for “two or three days” while the initial investigation is underway, an NTSB spokesperson told SooToday Saturday evening.