Other than a few hunters’ cottages the once vibrant mining town of Goudreau is mostly just foundation stones, rotting buildings, and a few hunters cabins now making it a veritable “ghost town”.

Jeff Klassen
Nov 17, 2015 9:00 AM
Previous Next
1 / 1 Goudreau cemetery is hidden away in the woods. Many of the gravestones are dated from around 1918 when locals say a plague hit the town killing many residents. Photo by Jeff Klassen
Expand
Previous Next 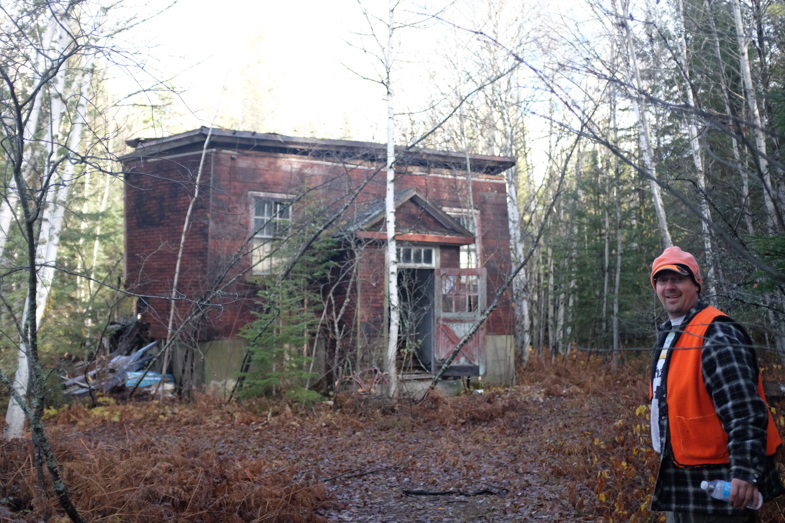 Other than a few hunters’ cottages the once vibrant mining town of Goudreau is mostly just foundation stones, rotting buildings, and a few hunters cabins now making it a veritable “ghost town”.

Stories about the town’s past sometimes conflict as most property-owners and those who live nearby seem to have either picked up their knowledge through word-of-mouth over the years or refer to an “Ontario Ghost Towns” website for historical information.

According to these sources, Goudreau was once a somewhat thriving gold and iron mining town whose occupants included miners, ACR workers, trappers, and their families.

Local estimates on the town’s peak population vary from a couple hundred to thousands and it is very difficult to tell now with considerable bush overgrowth and most buildings only remain as half-buried concrete foundations.

The story among locals is that a large portion of the town died from the Spanish flu in 1918 and some of the remaining visible gravestones in the town’s cemetery confirm that some deaths did happen around that time.

Just outside of town is an eerily red colored lake, dubbed Blood Lake, which Goudreau cabin users assume is connected to the town's mining past.

The lake is seemingly devoid of any life and is surrounded by mineral-rich yellow dirt with flecks of metal in it in an area that was perhaps a quarry.

Goudreau cabin-owner Bob Darlow of Sault Ste. Marie, whose steel plant work schedule allows him to come up to Goudreau every one or two weeks, calls the town his “kingdom” and he and friends come up to catch abundant moose, partridge, and fish.

Darlow said about 12 years ago the schoolhouse building was looted by “loggers” whom he said carried out vintage snowmobiles likely worth “thousands of dollars” that were being stored inside.

The schoolhouse collapsed a couple of years ago and is now a cemetery for snow machines that appear to be from the 1960s and 1970s.

Darlow said the woods surrounding Goudreau are filled with various other destroyed vehicles.

Don Smith, 68, from Hillman, Michigan, has been coming up to Goudreau to use cabins since 1972.

Smith said in the 70s there were no roads into Goudreau and they were forced to take the train from Hawk Junction 14 miles away but nowadays people mostly use a road from Dubreuilville set up by local industry in the 1990s.

Locals guess that the large ruined mining facility on the east side of town was a smelter.

The destroyed concrete and brick facility, which is now the first thing you see when entering the town by car, is perhaps the only tangible remains of the scale of industry the town once supported.

Other than a few cabin-owners like Darlow and Smith there are no full-time residents living there these days apart from George 'Rambo' Kennedy who lives there full time from early spring to late fall and acts as caretaker for everyone’s properties.

Kennedy runs a small informal business selling handmade leather and deer-antler products to hunters who visit Goudreau with his annual sales making the GDP of Goudreau about a few hundred dollars a year.

The Ontario Ghost Towns website states that German prisoners were held in the town during the Second World War.

The ACR track goes through the town and although the station has been torn down for some time the train still occasionally stopped in Goudreau up until this year; one of its main functions was for carrying snow machines in the winter when the road into town is inaccessible.

Darlow said Prodigy Gold Inc. may be setting up a mine in the region soon and that any operation like that might attract more people into his private hunting paradise.

“I’m not worried, people need jobs in Northern Ontario and they're going to give 350 people work. It’s going to raise the value of my camps, but I don’t really want to sell. Everyone in Goudreau is getting old except me. The less people I can keep in here the better it is for me for fishing but (especially in Dubreuilville) they need jobs up here bad,“ said Darlow.

More information on Goudreau can be found at Ontario Ghost Towns

(PHOTO: Bob Darlow is pictured outside the ruined schoolhouse in Goudreau. The building is covered, like many building in Goudreau, in a fake-brick material. Jeff Klassen for SooToday)