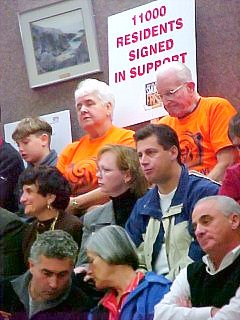 With a packed gallery watching, Council voted 9-3 in favour of the 100% Smoke Free Initiative, which was supported by a coalition of 13 local health agencies but vigorously opposed by bar and bingo owners, and by numerous charities that derive income from bingo facilities.

Speaking in favour of the ban:

Also on the list to speak against the ban was Tom Mauro from Sault College. Mauro did not appear. No reason was given for his absence.

With Art Jennings present for moral support, Ian Overman of the Sault Speedskating Club told councillors that 75 percent of the club's budget goes to travel expenses, much of which is raised through Friday-morning bingos at Greenbelt, which has special ventilation technology and separate rooms for smokers and non-smokers.

"If for a moment I thought we would be exposed to second-hand smoke, we would not be there," Overman said. referring to Greenbelt's technology as "state-of-the-art."

Without bingo revenue, the Sault Speedskating Club will be reduced to a mere recreational group.

"Hosting meets would be a things of the past," Overman said.

Prior to that vote, Councillors Brady Irwin and Pat Mick sought to have the implementation date moved forward to May 31, 2003, to respect the wishes of 11,000 residents who signed the 100% Smoke Free petition.

But that effort failed. Here's how councillors voted on early implementation:

Today's Sault Star reports that Councillor Irwin left last night's meeting to discover that his car window had been smashed. Nothing was taken and Irwin was unable to say whether the damage was related to the meeting. The incident is not mentioned in today's police report. No plebiscite

Council also held a third vote on the issue.

Councillors Frank Manzo and James Caicco tried to get Council to agree to hold a plebiscite on the issue during the next municipal election in November of next year, but were voted down. It wasn't a recorded vote.

For full information about how the ban will be implemented, please click here.

Issue may be revisited?

Mayor John Rowswell, who rushed others through their presentations and then made one of the longest orations of the evening, left the door open for Council to revisit the issue prior to implementation of the smoking ban.

The Mayor referred both to his mother, a long-time volunteer with the Heart and Stroke Foundation, and his father, known to enjoy many a cigarette with his beer at the Algonquin.

"They're hooked. I think that some consideration is due to smokers," Rowswell said.

The Mayor, a professional engineer, said that he's not yet convinced that the effectivness of ventilation has been definitively proven, but he expressed willingness to review the evidence prior to implementing the smoking ban.

What have you been smoking?

Still paying for news when you can get it free? For free access to the latest breaking news, why not make SooToday.com your home page? It's easier than quitting smoking. Just click here.