NEWS RELEASE PAVERDECK **************************** Good deed by local firm gets noticed When the Soo’s own Paverdeck decided to build a deck for an injured Canadian war veteran returning from Afghanistan, their objective was to only to acknowl
SooToday Staff Oct 3, 2012 2:49 PM
Previous Next
1 / 1
Expand
Previous Next 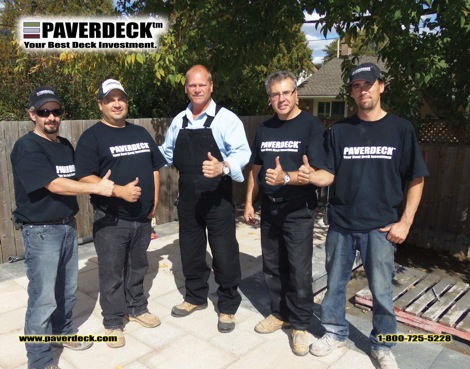 When the Soo’s own Paverdeck decided to build a deck for an injured Canadian war veteran returning from Afghanistan, their objective was to only to acknowledge this war veteran and contribute something towards improving his situation on returning home.

“We partnered with Jim Caruk, the well-known HGTV host, and founder of Redoes For Heroes Foundation and chose an initial project in Toronto,” said John Naccarato, Paverdeck’s president. “While building the deck in Scarborough, some Mike Holmes crew members stopped by and were so impressed with the Paverdeck system, they referred it to Mike to consider for an upcoming episode of HGTV’s Make it Right. We made the pitch at the tailgate of our truck, and Mike quickly threw his support behind the product for the show.”

The Paverdeck system is the only maintenance-free lifetime deck available in the market, and at a price that competes with a traditional cedar or composite deck.

When you factor in the lifespan of the Paverdeck system and elimination of annual maintenance costs, this type deck is actually less expensive than any traditional deck, and will hold its value over time because it does not need replacing.

The Paverdeck system is made from recycled steel, is the only deck with a zero-carbon footprint during use, and is itself 100 percent recyclable.

The Paverdeck system has the potential to save millions of acres of forests and will never see a landfill or incinerator.

It is more environment friendly than a wood or composite deck.

The project with Mike Holmes was filmed this past week in Toronto, and the company had all employees involved.

“It was a great experience for all involved, and the Mike Holmes crew and organization were top notch and personable. We are looking forward to more opportunities with them in the future.”

The show is scheduled to air sometime this spring.

Evolutiondeck Inc. is an engineering company based in Sault Ste Marie, and manufactures the Paverdeck system for custom and DIY installations.

Paverdeck® is a registered trademark under license to Evolutiondeck Inc.