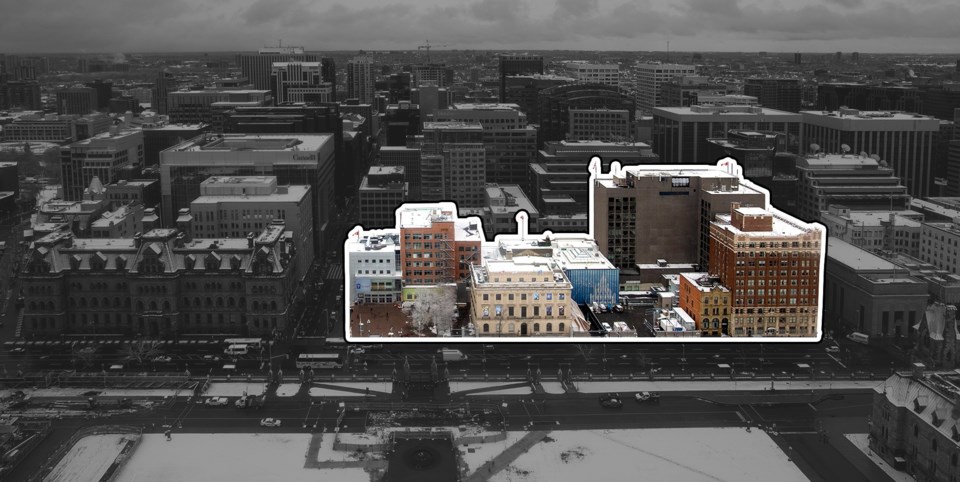 The Sault's IDEA Inc. is one of 12 firms shortlisted to redesign historic Block 2 in Ottawa (highlighted), seen from the Centre Block's Peace Tower. Government of Canada photo

Sault Ste. Marie’s IDEA Inc. (Integrated Design, Engineering and Architecture) has been shortlisted in an international competition to redesign a city block of historic parliament buildings in Ottawa.

“This is a very significant project for our country. We felt very honoured (to be shortlisted),” said Jeanette Biemann, IDEA Inc. principal and director of engineering, speaking to SooToday.

IDEA Inc., along with its partner, WilkinsonEyre (based in the United Kingdom) is one of 12 engineering and architectural companies to make the shortlist.

The federal government recently launched the Parliamentary Precinct Block 2 International Design Competition as a part of its plan to renovate, restore, and modernize the buildings of Canada’s parliament.

Located directly across from Ottawa’s Peace Tower, Block 2 of the parliamentary precinct includes 11 existing buildings and is nearly 110,000 square feet in size, consisting of office space for the House of Commons and the Senate, the Library of Parliament, and retail space along Sparks Street.

The block includes the former chancery of the U.S. Embassy and CIBC’s main branch in Ottawa.

The renovated, restored and modernized area will include offices for parliamentarians, government meeting centres, visitor centre areas and a building dedicated for use by Indigenous peoples of Canada.

IDEA Inc. itself has recently grown to include an office in Ottawa, its Sault home office located in Station Tower on Bay Street.

Each of the 12 companies in the running to receive the contract for the project has been shortlisted for their credentials.

Now it’s time to roll up their sleeves and start designing.

“Throughout the summer we’ll be preparing designs and then submitting them, and then six of the competitors will get shortlisted again, and that’ll be in the fall,” Biemann said.

From there, more detailed designs will be submitted and prizes will go to the top three firms by the end of this year.

As far as timelines are concerned, it is anticipated that the winning firm will be chosen and announced in early 2022.

The Royal Architectural Institute of Canada will oversee the competition, along with a multidisciplinary jury. The design competition manager, Phase Eins, is headquartered in Berlin, Germany.

“We’re going to look to innovate through this process, working with our partners to respect the nature of the area and the uses of the different buildings and bring something unique to the district, respecting the Indigenous community and the heritage of Canada,” Biemann said.

“The prospect of eventually winning this project and even just being involved in the design competition (means) you’re following in the footsteps of some of the most important architects in Canada, getting to build on their legacy and having a part in rejuvenating one of the most important blocks of architecture in Canadian history. It's a massive honour for all of our staff involved in the project,” said Ryan Crowle, IDEA Inc. principal and director of operations in a phone interview from the company’s Ottawa office Wednesday.

A physical, 3D model of IDEA Inc.’s design (along with those from the other shortlisted firms) must be submitted to Phase Eins in Berlin by the first week of August.

“It’s really an honour for our staff to be involved in this. This is almost like going back to school. It’s really creating that excitement of theoretical design. Our designers are getting to really think outside the box, to be as creative as they can be,” Biemann said.

If IDEA Inc. wins the contract, the team’s architects would spend approximately a year developing renovation/construction drawings, construction to begin in 2023, Crowle said.

The projected cost of the renovated, restored and modernized project is $430 million.