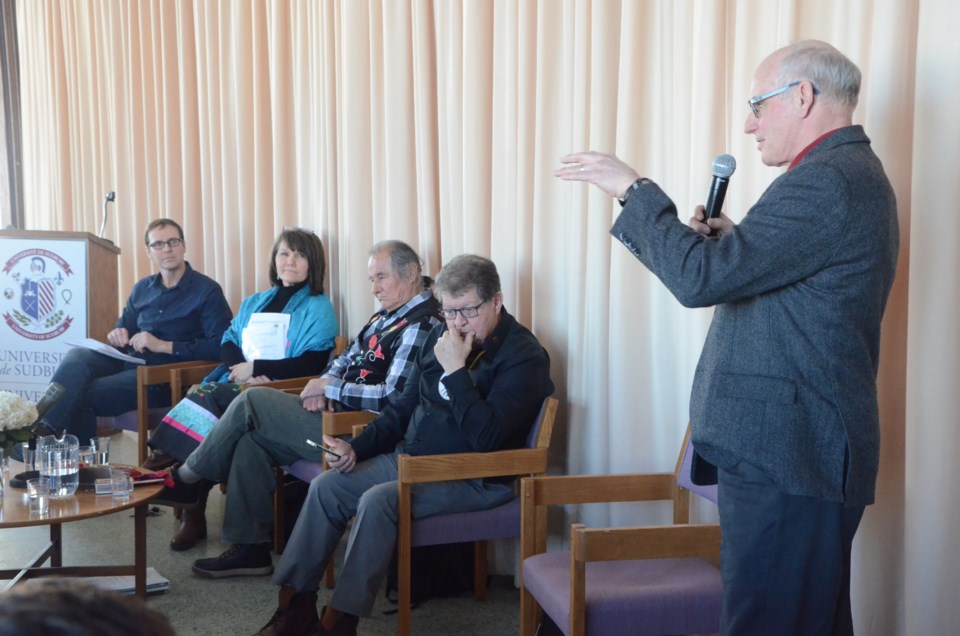 With Phase 2 still scheduled to begin September 30, some key players in the Robinson-Huron Treaty annuity payment court case remain optimistic a settlement will be reached at the negotiating table.

That, despite the fact the Province of Ontario has reserved its right to appeal the decision handed down by Superior Court Justice Patricia Hennessy obligating the federal and provincial governments to increase the annual payment.

Mike Restoule, chair of the Robinson-Huron Treaty litigation fund that brought the case to court on behalf of the 21 First Nations, said he believes the province has reserved its right to appeal in an effort to keep their options open.

“Maybe they are using it as a bargaining chip, but I really don't know what their intentions are,” Restoule said on Monday during a panel discussion at the University of Sudbury. “The judge's decision says we have to sit down and settle this, so I think we have to allow this process to happen. I believe they are doing this in good faith.”

However, the grievance started back in 1851 when there was no increase to the annuity despite the increase in mining activity in the territory, said Restoule. For more than 150 years, the leadership of the Anishinaabe kept urging the Crown to honour the promise it made, and to respect its responsibility to renew the treaty.

“We took a long time before we could put together a case,” Restoule said. “It wasn't easy getting 21 chiefs together in a process to bring this case to court.”

And while those First Nations receive money from the governments to operate their communities, they couldn't take that money and use it to launch a lawsuit against the very governments that gave them that money in the first place, he said.

In 2010, the chiefs accepted a proposal to create a trust indenture with the mandate to get this case to court, and to get the money to finance that court case.

One trustee from each First Nation — 21 in total — was appointed to the trust indenture. They secured a bank loan, gathered the experts, and assembled a legal team to bring their fight to the courts.

Hennessy's decision was a momentous occasion for all involved, Restoule said.

“We are so happy that we will get our fair share of the Crown net revenue, as well as duty of disclosure and consultation, both of which are very important to settling this,” Restoule said.

Retired Superior court judge Stephen O'Neill was also a panel member. He said he's heard a lot of people say they are disappointed with Ontario's decision to potentially appeal the decision, but “they have the right to do so under the rules of civil procedure.”

“One thing I've learned about the Anishinaabe people, though, is that they are a very patient and a very respectful people,” O'Neill said.

O'Neill, who has practised law for 42 years, said they have to give time for the process to play out. He pointed out, however, people have waited far too long for this decision.

“No one should settle for waiting too much longer,” he said. “Too many generations have passed to the spirit world already. We understand that Justice Hennessy made a decision, so what right does anyone have to delay resolution? I say justice delayed is justice denied, and we're at a moment of truth.”

How the members of the First Nations will receive their compensation will be up to the leaders of those communities, said Restoule.