They were congratulated on their accomplishments and thanked for their professionalism and insight over the years
Jun 14, 2018 10:00 AM By: SooToday Staff 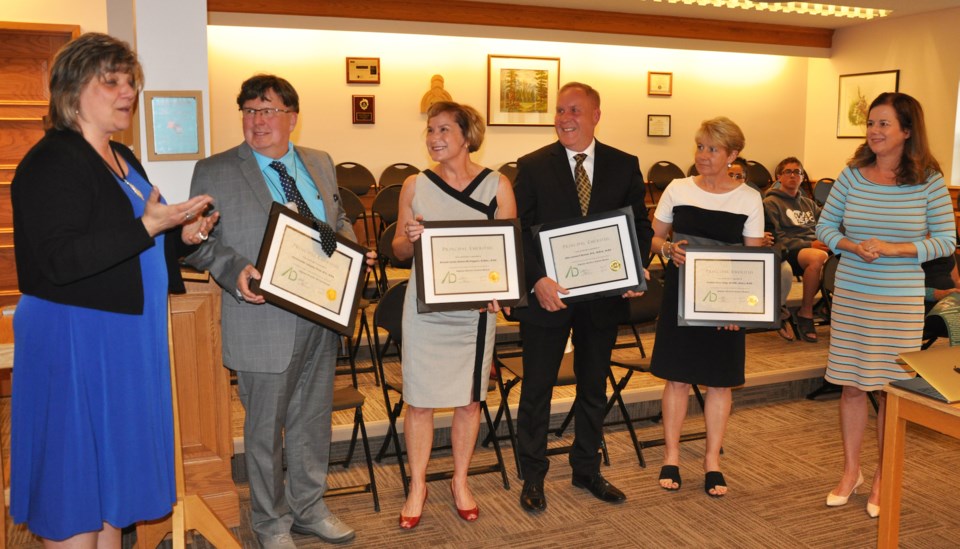 NEWS RELEASE
ALGOMA DISTRICT SCHOOL BOARD
************************
A number of principals retiring from Algoma District School Board (ADSB) were acknowledged at Tuesday night’s board meeting and were presented Principal Emeritus.

Brenda began her career teaching music at Maymount College School of Music in Sudbury. She moved to Sault Ste. Marie and taught for the Algoma Conservatory before going to teachers’ college in 1988. Brenda’s first job for the Sault Ste. Marie Board of Education was at Mountain View Public School teaching Grade 1. Brenda moved to Etienne Brule Public School and taught Grade 1 and 2 for five years. She then moved to Grand View where she taught Grade 1 and Grade 4. Brenda’s next move was to Ben R. McMullin where she spent three years as vice-principal and Grade 7/8 teacher. Brenda also served as vice-principal and Grade 7/8 teacher at Queen Elizabeth. Brenda’s first principal placement was in Bruce Mines at Arthur Henderson and completed her career as Principal at Echo Bay School.

Deb started working with the Sault Ste Marie Board of Education in September 1990 as a Special Education Resource Teacher at Mountain View PS. Over her career, Deb taught at Collegiate Heights, Aweres, Greenwood and Pinewood public schools. In September 2003, Deb returned to Aweres as a teaching vice principal. In September 2005, Deb became a principal, first at Arthur Henderson in Bruce Mines, then on to Laird, Echo Bay and Ben R. McMullin. In 2017 Deb relocated to the Ed Centre as an elementary system administrator and retired December 2017.

Ellis Nyman began his career in education with the former North Shore Board of Education in 1992 when he was employed as an administrative assistant at W.C. Eaket Secondary School. He then moved to the BAS department at the board office in Sault Ste. Marie and worked in both accounts payable and payroll. After attending teachers college, he was a teacher at both Blind River Public School and Iron Bridge Public before becoming the principal at Iron Bridge Public School, where he also maintained teaching responsibilities. Ellis became the principal at Blind River Public School in 2007, many years after walking through the door as a Kindergarten student himself.

Chris Rous is retiring after providing 40 years of service within the Algoma District and the Algoma District School Board. He worked at Wm. Merrifield in the Orthopedic Unit and for many year, Chris was part of Children’s Mental Health Algoma – Day Treatment Program (now Algoma Family Services). He taught at Mountain View, White Pines, Continuing Education and Etienne Brule’s primary behaviour class. He became vice principal at Tarentorus and in 2003, Chris became the principal at Rockhaven School. He was the board representative on the Library Board and the Theatre Board for years.

Chair Jennifer Sarlo and Director Lucia Reece congratulated Brenda, Deb, Ellis and Chris on their accomplishments and thanked them for their professionalism and insight over the years.