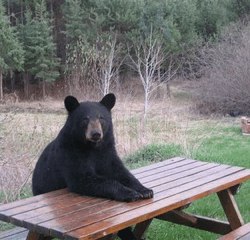 A Sault area man who had to shoot a bear in defense of his family and friends says he feels betrayed by the Ministry of Natural Resources (MNR) and that he had to plead guilty to charges against him because he couldn't afford to defend himself against them, even though they were unfounded.

As reported earlier by SooToday.com, Lyle Armstrong recently pleaded guilty under the Fish and Wildlife Conservation Act to unlawfully hunting a black bear without a license and unlawfully discharging a firearm from a vehicle.

Armstrong doesn't deny killing the black bear (not the bear shown) but he says Bearwise representatives of the MNR told him to shoot the bear if it was a direct and immediate threat to his family or property.

The bear in question had been coming to the Beaumont Mobile Home Park in Heyden, just north of the Sault, since this past spring.

It wasn't the only one drawn to the trailer park by the dumpster but it was, by far, the most brazen.

"I had to call the MNR when the bear came in our yard and my wife had to jump the fence with our young child to get away from it," said the Goulais River volunteer firefighter.

That's when he was referred to the Bearwise program.

He was told to first call the police if he felt threatened by a nuisance bear but to shoot it if the danger was immediate.

Armstrong did call the first few times the bear came in the yard.

They, and later MNR people, came out to investigate the problem but they arrived long after the bear had left again.

Armstrong knew he could kill the bear if he had to; but, as an avid hunter, he had qualms about killing an animal and wasting the meat.

He says he told the Bearwise representative about his misgivings and that person said he would probably be allowed to keep the meat or that it would be given to someone to be used - that it would not be wasted.

That was his only worry about having to defend his family and home from this nuisance bear that was becoming increasingly aggressive in the trailer park.

On July 18, Armstrong was having a back-yard barbeque at the trailer in Beaumont Park.

His wife was cooking and about half a dozen fellow volunteer firefighters were there with their families as well.

"The bear came right in the yard again, even with all those people around, and headed toward the barbecue," said Armstrong.

He quickly retrieved his high-powered rifle and ammunition from their lock boxes while everyone hurried inside for safety.

The bear was sniffing around in the back yard making it's way toward the barbecue on the back deck.

It didn't look like the bear was just going to go away this time.

Armstrong, who was on crutches and recovering from a leg injury at the time, went out to the back deck, steadied himself and took careful aim.

His years of first responder training and hunting experience helped him overcome his leg injury and get a good, safe shot.

The bear didn't drop immediately from Armstrong's first shot so he took a couple more, making sure they were clear and no one was going to get caught in the line of fire.

He hobbled across his back yard and watched the bear head toward the woods, obviously seriously injured.

A couple of his friends took to a truck to follow and make sure the bear died and didn't run off wounded.

One rode in the back to get a better view while the other drove.

A witness to the incident said he thought the one in the back of the truck was Armstrong and that he was shooting from there but Armstrong said it couldn't have been him since he was back in the yard with his gun and, because of his leg injury, he couldn't have gotten into the back of a pickup truck if he tried.

He also said that he didn't shoot from inside his house and that the first shots to the bear landed while it was still on his property but the last hit as the bear left his yard.

But it still would have cost a considerable amount of money to defend himself in court so Armstrong pleaded guilty to the charges against him and threw himself on the mercy of the court, hoping the fine would be less than his defense would have cost.

It was but that doesn't make this bitter pill any easier for Armstrong to swallow, he said.

"I didn't go joy shooting this freakin' bear," he said. "I did everything I was supposed to do and this is what happened."

It ended up costing Armstrong's family more anyway as they felt unsafe in their home and decided they had to move rather than face more nuisance bears without the means to deal with them.

SooToday.com was unable to contact the appropriate MNR spokesperson by the time of writing this story.

We hope to bring you more information from the MNR early this week.