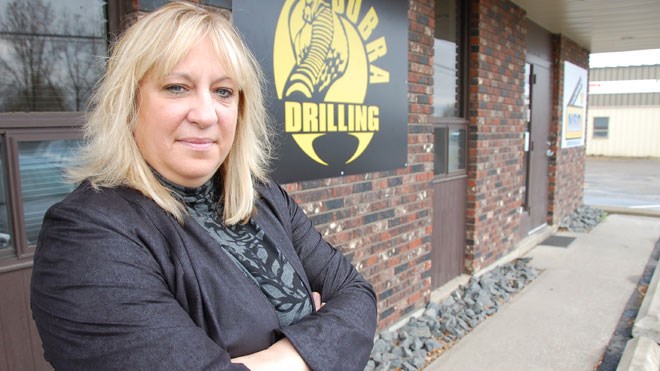 Women in Mining chair Barbara Courte thinks a junior exploration company’s saucy professional video on the Ring of Fire is insulting to women working in the industry. Supplied photo.

The reviews on a racy Ring of Fire promotional video from KWG Resources featuring bikini models is drawing mixed reaction from some professional women in the mining industry.

If the video was intended to educate casual investors on the Ring of Fire, Barb Courte, chair of the Thunder Bay chapter of Women in Mining, wondered what kind of lesson was being absorbed.

“If you want to educate people, putting someone in a bikini is not going to educate them. It’s tacky.”

She posted the video, entitled “5 Interesting Ring of Fire Facts,” to her chapter’s Facebook page to gauge members’ reaction.

“Basically, the women are not happy with this, and you know what? We’ve evolved. Why must we go back to the old days? If you’re trying to appeal to a younger audience, that’s not how you do it.”

The short video features two former Sunshine Girl models promoting the mineral and economic potential of the Far North deposits while lounging at a lakeside cottage.

Released in early August, the video has gone viral through social media, having been picked up by tabloid media outlets as far away as the United Kingdom.

According to KWG president Frank Smeenk, the video is the brainchild of self-promoter Theresa Longo, one of the models, who is the company’s new strategic marketing consultant and brand ambassador.

The video is one of a series of “Mining Minute” episodes posted on the chromite junior miner’s website and on YouTube.

Courte, a former drilling company boss, views it through her own personal lens of being treated as a novice industry interloper, because of her gender, when she took over her late husband’s outfit in 2007.

As a mentor to young women entering the field, Courte said the video doesn’t reflect well on an industry that struggles to recruit women into the workforce. And it doesn’t help those who face harassment on the job today.

“We do have cases in the northwest of women being bullied. It’s hard enough for women to get into this industry and stay in it.”

Using sex appeal to “appeal to a certain audience” doesn’t do much to enhance KWG’s professional reputation, she said.

“Would you invest in that company? Do they think anybody really got the message?”

Courte said her chapter likely won’t ask the company to pull the video.

“If that’s the direction they want to take, they’re free to do it. I’m not asking them to take it down. It should be their decision.”

Hume responded by email that she had “no issues with any company promoting their company story through short video clips over the internet.”

The CEO of CHF Investor Relations said “many companies use attractive young women as hosts.”

Having known Frank Smeenk for 30 years, Hume called him a “passionate explorationist who left a lucrative legal practice in search of mineral discoveries.”

Toronto public affairs expert Melanie Paradis said the uproar over a video “romp around cottage country” places the wrong emphasis on finding ways to jumpstart the Ring of Fire.

“If the intention was to get people talking about the Ring of Fire again, this video was begrudgingly successful,” wrote Paradis in email.
Paradis, a senior advisor with Earnscliffe Strategy Group, who works on strategic communications with natural resources companies, responded that “instead of elevating the conversation,” the dialogue revolves around “opining about the appropriateness of bikinis and barbecues in a well-intentioned but deeply misguided YouTube video.”

“There is nothing shocking about a video with two young women in bikini tops and shorts. What is shocking is how remarkably disconnected this video is from the realities of the Canadian mining industry. Sex might sell, but it definitely doesn’t build mines.”

The co-founder of Fladgate Exploration Consulting said the company missed the mark in educating the public on the mining industry by resorting to what usually works in advertising.

“I hate to think that this is now going to be used to vilify mining and become a statement on how women are treated in our industry. I think it’s more a statement about the advertising world and how all of society accepts sex in advertising everywhere else.”

In her 15 years in the mining industry, Jeffs noted, her gender has never held her back.

After viewing the video, Jessica Bjorkman, an Atikokan-based prospector, doesn’t see what the big stink is all about.

“I was expecting it to be way worse from people being upset about it. But I don’t think it was such a big deal.”

Jessica and her five siblings are all involved in the family enterprise, Bjorkman Prospecting, started by their father, Karl Bjorkman, in the 1990s.

Bjorkman calls it a “double standard” to criticize a mining company for resorting to the kind of suggestive content that’s so prevalent in mainstream advertising and media today.

“I’m not offended. I think it’s a little bit comical that some people are. Look around at our society. There are way more scantily-clad women in the media. So I don’t see what the big fuss is about this.”

Bjorkman said the company’s reputation might take a hit, but she laughed off the notion that it might be a deterrent to women considering entering the industry.

“I thought it was a cute little video,” she said. “It’s a little bit cheesy and might take away their (KWG’s) credibility in some people’s eyes, but at the same time that’s their choice.

“In general, I’m a Christian, I believe in being modest. But if I had to say if it’s a good idea, I’d say no. But I don’t see why the outrage over this video versus everything else. I thought it was hilarious actually.”