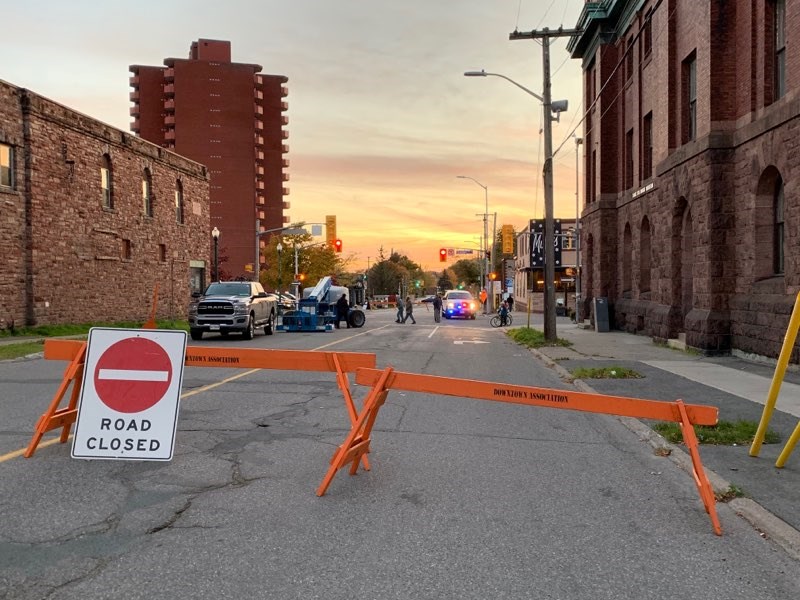 A Downtown Association barricade stands on East Street near the intersection of Queen Street on Friday evening. Photo submitted by Maarit Steinwedel

Advance notice of most significant disruptions of Queen Street traffic is provided either by the city or Sault Ste. Marie Police Service, but no general announcement was made about this one, prompting complaints to SooToday by irate business owners and their customers.

Off-duty police officers and Downtown Association barricades were directing traffic off Queen Street from Pilgrim as far as Brock Street.

Police headquarters confirmed to SooToday that the traffic disruption was related to a film production.

Crew members working on Queen Street say it's The Middle Man - the same production that's been filming around the Sault for the past three weeks, with production trailers based in the Albert Street parking lot.

Police were unable to tell us how long the disruption would last, but crew members indicated it was a night shoot only.

Traffic was also affected on East Street near Queen.

Businesses in the affected area were notified of the closure, a crew member said.

Special lighting has been hung tonight from the roof of the Grand Theatre at 641 Queen St. E. and traffic cones line the sidewalk along the front of the Silly Rabbit Vape Shop next door.

Garden River First Nation to lift restricted access, take down check points in June
May 29, 2020 6:14 PM
Comments
We welcome your feedback and encourage you to share your thoughts. We ask that you be respectful of others and their points of view, refrain from personal attacks and stay on topic. To learn about our commenting policies and how we moderate, please read our Community Guidelines.