His Oct. 3 speech and town hall event at the Bushplane Museum is looking to be as meticulously choreographed as a Lucas Beaver stage show
Aug 28, 2019 9:46 PM By: David Helwig 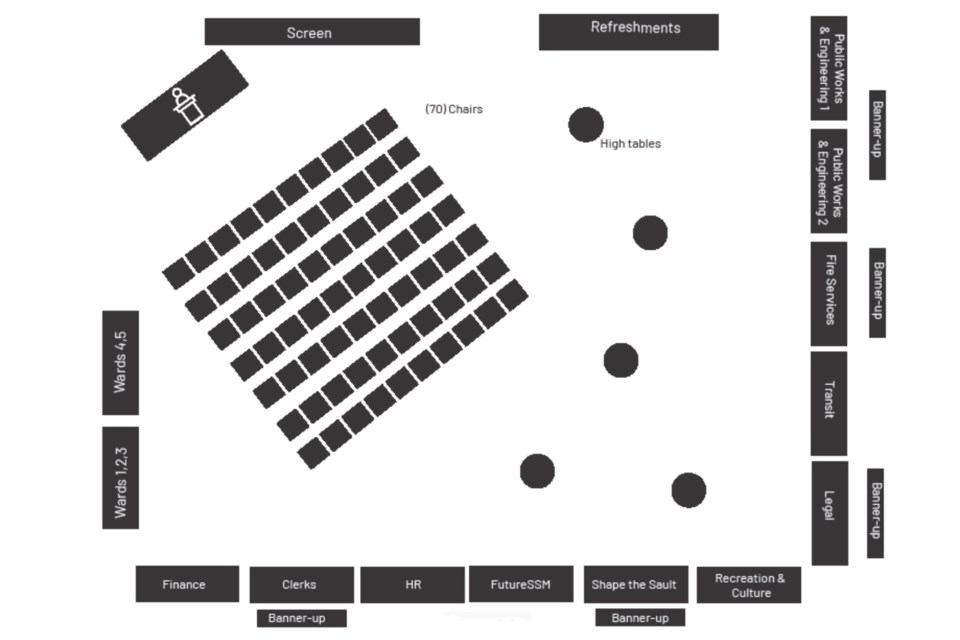 City staff have prepared this floor plan for a combined budget consultation/state-of-the-city event on Oct. 3, 2019 at the Canadian Bushplane Heritage Centre

Mayoral state-of-the-city addresses are a big deal in Sudbury and other places, but have never been much of a thing in Sault Ste. Marie.

That may be about to change as city officials quietly prepare a combination budget consultation/state-of-the-city event with participation by councillors from all five wards and staffers from every city department.

The tentpole event will take place from 6 p.m. to 8 p.m. on Thursday, Oct. 3 at Canadian Bushplane Heritage Centre.

Planning for the combined event is extensive and it's looking to be as meticulously choreographed as a Lucas Beaver stage show.

"This is a great opportunity for him to showcase some of the projects that we've been working on and some of the highlights of the past year," Vecchio says.

The mayor's speech will be followed by 15 minutes of closing remarks from White.

From 6:45 until 8 p.m., attendees will be invited to mix and mingle with ward councillors and city staff representing the following departments:

City departments will be represented by tables surrounding the periphery of the meeting space.

Display boards representing each of the city's five wards will be set up near the entrance and ward councillors will be available there.

"It's an informal town hall opportunity to gauge the public and the community and get some valuable feedback," Vecchio tells SooToday. "They can take feedback from individual constituents pertaining to their wards."