A small group of protesters marched up East Street to the Sault Ste. Marie Indian Friendship Centre this afternoon, demanding increased emphasis on traditional ways and answers to allegations of nepotism and staff and elder abuse.
Aug 8, 2002 1:00 AM By: David Helwig 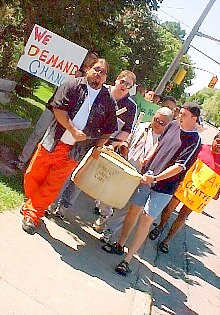 A small group of protesters marched up East Street to the Sault Ste. Marie Indian Friendship Centre this afternoon, demanding increased emphasis on traditional ways and answers to allegations of nepotism and staff and elder abuse.

About 20 protesters met for about two and a half hours in Clergue Park, then marched to the 122 East Street building accompanied by drumming and singing.

The group has called a general membership meeting for 7 p.m. on August 21 at the Oddfellows Hall on Dennis Street, to consider removal of the board of directors.

That meeting was originally to have been held today, however Suzanne Farrell, the Friendship Centre's new executive director, refused to call any meetings prior to the annual general meeting on Sept. 26.

The August 21 gathering will be the group's third attempt to oust the Friendship Centre's board.

In June, a bid to remove the board fell six votes short of the two-thirds majority needed for it to pass.

On the front steps of the Friendship Centre this afternoon, the group listened to speeches by Joetom Sayers and other community members, then followed elder Peter Migwans in a ceremonial placement of tobacco around the building.

"This is why it's called the Friendship Centre, so that people will be together," Migwans said.

Several speakers expressed concern that a Centre staffer was recently terminated after allegations of political activity, while others have been cautioned against taking sides in the dispute.

Friendship Centre president William Bellerose arrived midway through the protest, pulled up a lawn chair, and listened to many of the speeches.

Afterward, he told SooToday News that he's at a loss to understand what the group wants.

"If they want information, all they have to do is ask," Bellerose said.

"Without knowing their issues, there's no solution."

Bellerose won't be at Aug. 21 meeting

In SooToday's presence, Sayers invited Bellerose and all other Friendship Centre directors to attend the Aug. 21 meeting.

Bellerose responded that he will not be attending because he's on vacation.

"We're off for the summer," he told Sayers.

As for allegations that the Friendship Centre is turning its back on Indian traditions, Bellerose said that couldn't be further from the truth.

"The building is smudged [a cleansing ceremony] at least once a month, sometimes once a week," he said.

Background on the dispute

To read previous SooToday coverage of the Friendship Centre dispute, please click on the following links: