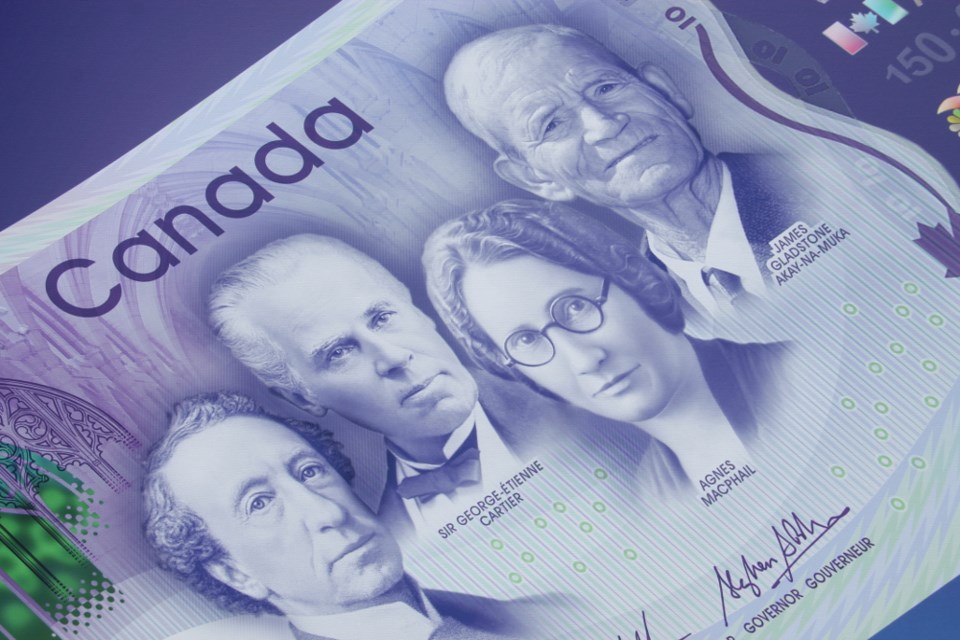 The Bank of Canada is touring Ontario to promote the commemorative 10 dollar bank note issued June 1 to celebrate Canada 150.

Nish Vairavanathan, Toronto-based Bank of Canada Ontario Regional Office analyst, was on hand at the Sesqui cinematic dome site currently moored in the northeast corner of Station Mall’s parking lot Monday to greet visitors (with plenty of brochures regarding the $10 note, but not to hand out any free notes).

“The back of the note has a landscaped theme, with different images taken from different parts of Canada (including our own beautifully rugged Canadian Shield region).”

“It’s not a regular circulating bill.  We printed 40 million of these notes and they will be available at financial institutions for a period of time,” Vairavanathan said.

Any Canadian bank note issued since 1935 is still legal tender.

“About 75 per cent of people we surveyed said they would keep this note because it’s a special bill, but you may come across this note for some time,” Vairavanathan said, but he added banks may pull the Canada 150 $10 notes out of circulation by order of the Bank of Canada to make room for a newer series of $10 notes at some point in the future.

The commemorative note has a series of three outstanding new anti-counterfeiting security features for consumers to look for, including light which switches from green to blue when you tilt the note (located on the Memorial Chamber Arch image), raised ink on both the front and back of the note, and what appears to be 3D maple leaves, but when touched, feel completely flat.

“This will help inform the Bank of Canada when we issue future notes,” Vairavanathan said, adding the Bank works closely with law enforcement agencies in regard to counterfeiting.

“Counterfeiting has been on the decline with respect to Canadian bank notes, especially with the introduction of the polymer series notes and education and awareness.”

There will be a new $10 bank note introduced in 2018, with the image of Nova Scotia human rights activist Viola Desmond replacing that of Sir John A. Macdonald.

The image of Macdonald and Sir Wilfrid Laurier, currently on the $5 note, will be moved to new $50 and $100 bank notes, though it is not certain which image will go on which note, Vairavanathan said.

It is not yet known who will be featured on the new $5 bank note.

“We like to get what the general public wants to see in terms of the theme…you’ll hear in the future,” Vairavanathan said.

The Bank of Canada official said he anticipates the image of Queen Elizabeth II will continue to be seen on the $20 bank note (as well as the Loonie and Toonie).

What of William Lyon Mackenzie King, Canada’s longest serving Prime Minister who led Canada through the Second World War and introduced many useful social safety net programs such as Employment Insurance, whose image is currently seen on the $50 bank note?

What of Sir Robert Laird Borden, who guided Canada through the First World War, a time in which many feel Canada truly came of age as a nation?

What happens when their images are removed to accomodate Macdonald and Laurier on the new $50 and $100 bank notes?

Key figures in Canada to be certain, so why remove them?

“With respect to the 10, we wanted to put an iconic Canadian woman on a note and there is only so much space with respect to the five denominations we have in circulation,” Vairavanathan said, even though the Bank of Canada put the images of four people on the commemorative 10 dollar bank note.

What of the future of cash itself, with the masses turning to debit cards, credit cards and shopping online?

“The use of cash is going down, but for us, as long as we can provide something Canadians can use with confidence, something that’s secure and hard to counterfeit, that’s what we care about the most,” Vairavanathan said.

Here's what the province should do now to make LTC homes safer: Ontario Medical Association
Jan 19, 2021 8:00 AM