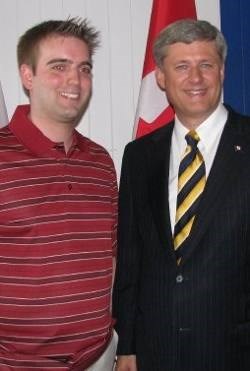 "I taped the event on my digital camera, in plain view, and after rewatching the tape and hearing Harper's comments again, I shared it with friends, some of whom are also Liberals," Tetreault told us tonight.

Harper states that he thinks a Conservative majority government is within reach in the next federal election.

If the Conservatives don't win a majority, Canada will be governed by the Liberals through a coalition with the New Democratic Party and Bloc Québécois, Harper said.

The tape, parts of which were shown last night on CBC television, is being cited by the Liberals as evidence of Harper's unwillingness to work with other parties.

SooToday.com contacted Tetreault today after being told by Conservative Party members that they suspected him of taking the video.

"I have always been a proud Young Liberal, and have never hidden that fact from anyone," Tetreault told us tonight. "I was invited to the event by Josh Pringle, the Conservative riding president, who knows I am a Liberal."

Tetreault has held numerous positions within the provincial and federal Liberal parties, including president of the Algoma University Young Liberals and northern coordinator of the Ontario Young Liberals, and has served as a director on both local riding associations.

He has also assisted in many campaigns, including Michael Ignatieff's bid for the leadership of the the Liberal Party of Canada.