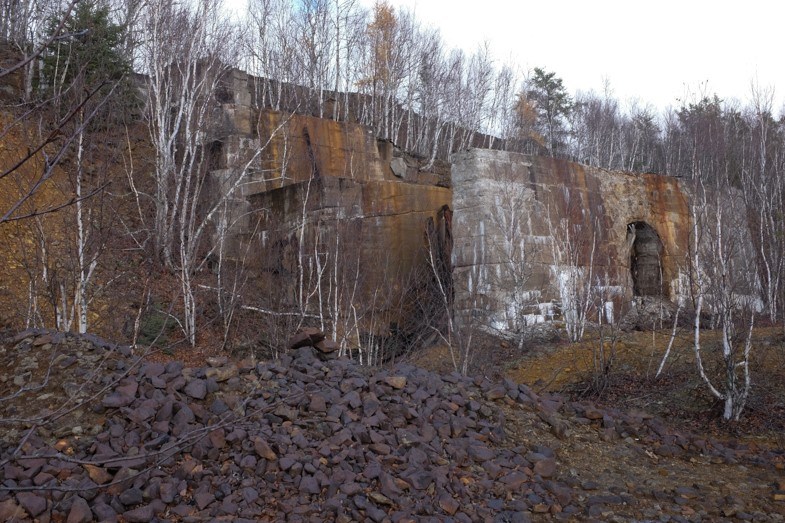 Former mining site on the east side of the ghost town of Goudreau, Ont. Locals say the building shown is a former smelter. Jeff Klassen/SooToday

The court-appointed monitor wrapping up the affairs of what used to be Essar Steel Algoma Inc. is exploring a possible deal to sell the MacLeod Mine and Goudreau Pits, inactive mine sites in the Wawa area.

The monitor, Brian Denega of Ernst & Young Inc., reveals in a recent court filing that the prospective buyers may also acquire other former Algoma mining properties.

When the sale of the Sault's steelmaking operations closed last Nov. 30, the legacy mine properties were excluded from the transaction.

Most of the properties have been owned by Algoma since the early 1900s.

"Most haven't seen exploration for more than 40 years and have been historically explored almost exclusively for iron," said a sale listing.

"These projects were all acquired for the purpose of exploring/exploiting iron resources, yet many are in known gold-producing areas as well and have yet to see serious exploration for gold or other commodities. There is potential for most of the properties to find new mineralization with modern exploration techniques," the listing said.

The Goudreau Pits are about 35 kilometres northeast of Wawa in Aguonie Township.

The George W. MacLeod Mine is located north of Wawa, along the Magpie River.

The latest owner of the Sault's steel mill, a newly incoporated company using the old Algoma Steel Inc. name, agreed to provide financial assurance to the province for environmental remediation and monitoring at the two former mine sites, and to build a water treatment plant at the MacLeod Mine in exchange for a release from any legacy environmental claims against five directors/officers of Essar Algoma who are continuing with the new owner.

Iron ore mining started in 1898 at the MacLeod site, ending a century later in 1998.

"Decommissioning and rehabilitation has occurred at the site, involving removal of the surface infrastructure, re-vegetation of the tailings management facility, capping of openings and fencing of open pits and crown pillars," said an order issued by provincial environment officials the day Essar Algoma first sought insolvency protection in 2015.

"The underground workings of the mine have been filling with water since the closure and long-term treatment of mine water will be required as a result of oxidation of pyritic zones within the mine that are generating acid drainage into the mine," the order stated.

Work needing at that time to be completed at the MacLeod Mine included decommissioning the remaining buildings and infrastructure, and conducting further groundwater studies in the plant area to ensure any off-site contamination is not reaching the Magpie River and mine area.

Other obligations cited by the province included construction and operation of a mine-water treatment system, as well as ongoing maintenance, surface, groundwater and aquatic ecosystem monitoring.

The Goudreau Pits are located next to the ghost town of Goudreau.

"The site has historically mined pyrite from four open pits which started operation in 1914 and initially suspended operations in 1919. Ore was also mined from the pit from 1959-62 which was shipped to Wawa, Ontario," says the 2015 provincial order.

Manitou Gold Inc. is known to have been especially active in recent months in the Goudreau mineral belt.

The Sault steelmaking operations were sold to lenders who kept the company afloat since it first applied for protection from its creditors under the Companies' Creditors Arrangement Act (CCAA).

But court documents filed a week before Christmas confirmed there's nothing left for 125 Sault companies still owed for work done or supplies provided before the steelmaker filed for CCAA protection.

Old Steelco's protection from creditors has been extended to June 30, 2019 to allow an orderly wrapping-up of its affairs.