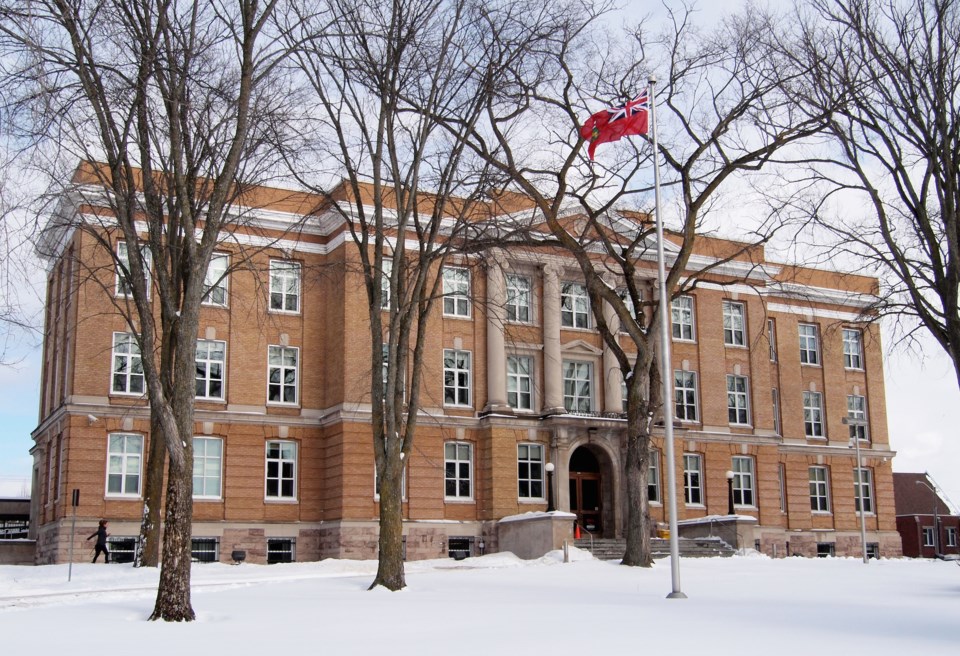 The Sault Ste. Marie Courthouse is pictured in this file photo. Michael Purvis/SooToday
Const. Jarrott Forsyth's assault on a female colleague's girlfriend during an off-duty altercation warrants a more severe punishment because he is a police officer, the Crown argued Friday.

The offence calls for a period of custody, Kaely Whillans said, suggesting the 10-year member of the Sault Ste. Marie Police Service receive a 30-to-60 day conditional sentence, which would be served in the community, followed by 12 months probation.

The Sudbury assistant Crown attorney opposed defence counsel Bruce Willson's contention that Forsyth should be given a discharge, which would mean he would have no criminal record, for what the veteran lawyer characterized as a "very minor form of common assault."

"Police officers should be subject to more severe punishment than others" when they breach the trust society has given them, Whillans told Ontario Court Justice Richard Humphrey.

Forsyth's actions "distracted from the law and law enforcement" and their impact can be seen in Lindsay Palmer's victim impact statement, she said.

Discharges should be used sparingly and only in exceptional cases, the prosecutor said, citing the need for denunciation and deterrence.

Humphrey found Forsyth, 35, guilty in August of assaulting Palmer after he became embroiled in a confrontation with Melanie Roach, a fellow officer, at the women's east-end residence in the early morning hours of Aug. 27, 2016.

Forsyth, who is suffering from ulcerative colitis, wasn't present in court for the sentencing hearing.

"He is very, very ill," Willson said, indicating his client, who has spent most of his time in hospital since Labour Day, is sick in bed at home.

The defence argued that discharges for common assault are quite common for first time offenders, even in domestic violence cases, and often recommended by the Crown in joint submissions.

In case law, police officers are held to a higher standard than the average person, but "that doesn't exclude your consideration of a discharge for a police officer," Willson told the judge.

The assault occurred when the trio was drinking following a bonfire at the home of two other officers.

During Forsyth's trial, Roach and Palmer testified the incident was sparked by Forsyth's attempt to kiss Palmer, which angered Roach, who ordered him to get out of their residence.

Forsyth maintained he was just giving the woman a hug, when Roach burst through the door and sucker punched him in the face.

When Palmer stepped in between the pair during the ensuing altercation, Forsyth used, what Willson agreed, was "excessive force" to shove her out of the way.

Palmer received minor bruising to her face and cuts to her foot, injuries he described as temporary.

"It would be quite disingenuous to characterize this otherwise than a common assault."

Whillans countered that there are "ample" aggravating factors in this case.

The defence is suggesting this is a mere minimal assault, that Forsyth was trying to get Palmer away from the altercation, she said, reminding the judge he had found in his decision that the accused's evidence about his concern was questionable and not credible.

"You accepted her evidence over his."

Palmer testified that Forsyth cornered her in the kitchen, that she said no more than once and he ended up kissing her on the neck, Whillans said, adding this was the scene Roach walked in to.

Palmer left the room during the confrontation, but when she looked into the room and saw Forsyth punching her partner, she got in between them, the prosecutor said.

There was some premeditation "when he grabbed her by the shoulder and shoved her into the wall," she said, adding he had done this to continue fighting with Roach.

"From the beginning to the end, his actions are aggravating," Whillans said. "There's not a single mitigating factor during this."

Palmer indicated in her victim impact statement that she has had to deal with unsubstantiated allegations that her relationship with Roach was abusive, she said.

Whillans suggested that in the totality of the circumstances a conditional discharge is "very much contrary to the public interest."

"There are exceptional circumstances here where the sentence should be more severe."

Willson pointed to an "extremely positive" pre-sentence report that described the married father of three as hard working, loyal, honest, kind hearted, a good police officer and friend and someone who could be relied on.

Many people were "shocked" when he was charged because aggressiveness is not a characteristic of his, the lawyer said.

He provided the court with a letter from the police service, written by deputy chief Sean Sparking, outlining Forsyth's work record and regular performance evaluations.

In these evaluations, his supervisors indicated he had a good work ethic, was a reliable and knowledgeable officer and an "asset to his platoon."

His file also contained a letter of commendation from a member of the community.

As a result of what occurred, Forsyth also faces "another punishment" — disciplinary proceedings under the Police Service Act, he told the court.

"Going to this proceedings with a conviction is not helpful and could be a tipping point re his termination," Willson said. "This offence should not warrant termination of employment."

A letter from the physician treating Forsyth, also provided to the court, indicated that his colitis was probably complicated or triggered by the stress of his charges and the trial, Willson said.

When he was charged, Forsyth was demoted after just receiving a promotion to detective constable.

He has suffered a significant financial loss because of this demotion and being on sick leave, and a benefit was held to raise money for him, Willson said.

Forsyth's case had been "very highly publicized here in Sault Ste. Marie," he told the Sudbury judge, suggesting this should be taken as a mitigating factor when imposing sentence.

Whillans questioned whether the publicity has created any hardship for Forsyth, beyond having to read about himself.

The Crown also suggested the upshot from his demotion was "having a benefit in his honour," while the victim continues to have concerns in her life.

A date for sentencing, which is expected to take place in May, will be confirmed Feb.26.

EDITOR'S NOTE: SooToday does not allow comments on court stories