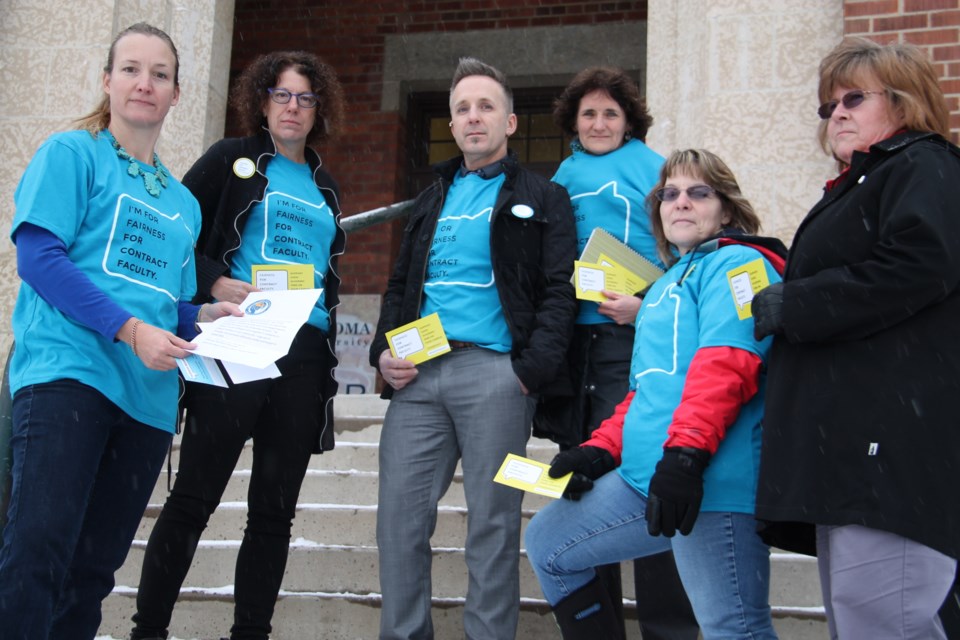 Algoma University part-time faculty members were joined by supporters in their call for a pay raise, Jan. 31, 2017. Darren Taylor/SooToday

Part-time faculty members at Algoma University say they realize times are tough, but they’re prepared to strike if they don’t get bigger paycheques.

Talks between part-time faculty members and Algoma University management broke off in December.

A conciliator was brought in, and talks will resume Feb. 7.

If an agreement is not reached with a conciliator at the table, part-time faculty could go on strike.

Raising pay for part-time faculty would cost $150,000 of Algoma’s $29 million budget (about half a percentage point), according to the Ontario Confederation of University Faculty Association (OCUFA).

Part-time faculty represent approximately half the faculty at Algoma.

“We understand the economic times are bleak, so we’re not asking for a huge raise, nor are we asking for full-time positions.  We’re looking to get parity with the second lowest paid university in the province, we’re looking for parity with Nipissing University.”

“We’re not looking for the mean salary or the median salary, we are looking to be tied with the bottom, and management (at Algoma) offered us zero for the next three years…we don’t think our request is at all unreasonable,” Robinson told SooToday as part-time faculty members and their supporters gathered at Algoma University’s front steps Tuesday.

“We don’t want to go on strike, we don’t want the students to have to experience the loss to their classes, or not being able to go home at the end of the term,” Robinson said.

“All we’re trying to do is hope, with the solidarity of people coming from the Labour Council, OPSEU and other representatives, that we can show management this is far from unreasonable and motivate them to settle on the 7th,” Robinson said.

Part-time faculty members, or sessional instructors, teach in each of Algoma’s three terms.

They teach as few as one course per term, or as many as four courses in one term.

“We’re here for today and the next three days to meet with allies from the community and the campus to raise awareness about the critical need for the university to get serious about negotiations, and, we hope, come to a fair settlement on Tuesday (Feb. 7) with the assistance of the conciliator from the Ministry of Labour,” said Andrea Calver of OCUFA.

“We’re coming to support the faculty in their hope for a new contract in the next few weeks,” said Michele McCleave-Kennedy, Sault Ste. Marie District Labour Council president.

Algoma University management officials were not immediately available for comment.