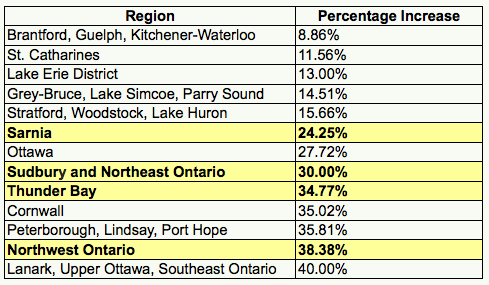 QUEEN'S PARK - The Auto Insurance Board of Canada is expressing strong objections to legislation introduced by Jagmeet Singh, an NDP Member of Provincial Parliament that would have the result of driving up auto insurance premiums paid by drivers in Northern Ontario.

Michael Mantha, NDP member for Algoma-Manitoulin, has recently been attempting to defend his NDP colleagues legislation even though it would come at a great financial expense to Northerners.

"Bill 45 will help Jagmeet Singh’s constituents at the expense of other Ontario drivers,” said Heather Mack of the Insurance Bureau of Canada. “We have read arguments from Mr. Mantha that Bill 45 will not hurt rural and northern communities; he is very wrong. Insurance Bureau of Canada used the expertise of actuaries and insurance professionals to determine the consequences the proposal. Northern Ontario drivers will end up subsidizing the GTA. The current system is not perfect but at least it’s based on facts and evidence. Unfortunately Bill 45 is based simply on Mr. Singh’s local politics."

Bill 45, the Insurance Amendment Act, introduced by NDP MPP Singh, would ban the use of territory as a rating factor in determining auto insurance rates.

Such a move would dramatically increase the cost of auto insurance for drivers outside of the GTA and have an especially negatively impact on drivers in rural and northern Ontario, who currently benefit from residing in areas of the province that are classified as lower-risk.

Banning the use of territories as a rating factor would increase premiums in Northern Ontario by 30 percent.

“The NDP’s auto insurance bill serves the interests of certain Toronto ridings at the expense of other Ontario drivers and I am surprised that Mike Mantha is defending legislation that will result in higher costs for northerners,” said David Orazietti, MPP for Sault Ste. Marie. “We need auto insurance reforms that benefit drivers across the province, not just in select regions where rates may be higher-than-average due to other factors such as increased fraud and theft.”

Such changes would give younger and new drivers the opportunity to pay rates comparable to those paid by other drivers with clean records.

The province is actively pursuing further measures to lower auto insurance rates for Ontario’s nine million drivers by working to tackle fraud and reduce the abuse of accident benefits and excessive assessment costs.

In 2011, the government appointed the Anti-Fraud Task Force to examine the scope of auto insurance fraud in the province and make recommendations for action.

The Task Force has returned an interim report to government and will produce a full report of proposals in the fall of 2012.

For more information on the Task Force and interim report, visit here

Measures that have already been implemented by the province to improve the auto insurance industry are showing positive results.

Since 2004, auto insurance rates have risen at a slower pace than inflation and, more recent changes that include the creation of the Auto Insurance Anti-Fraud Task Force, have resulted in a decrease of 0.18 percent in rates in the first quarter of 2012.

These trends are encouraging given that under the former PC government auto insurance rates jumped 44.9 percent.