He has some ideas about how the feds can help Essar Steel Algoma and Tenaris Algoma Tubes
0
Feb 3, 2016 2:36 PM By: SooToday Staff 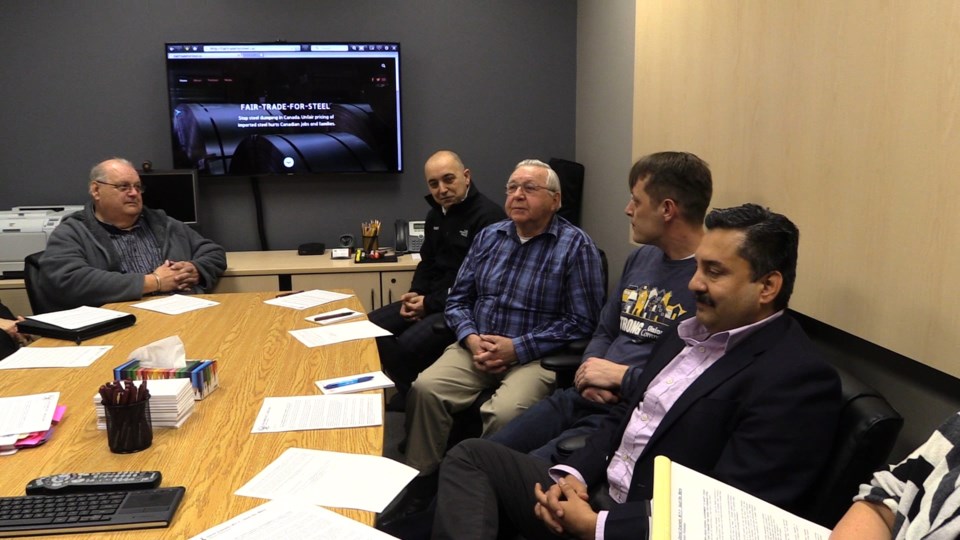 Reporters jammed in a room with officials from Essar Steel Algoma and Tenaris Algoma Tubes as well as union representatives from both companies.

MPP David Orazietti summoned the local media to his office this afternoon to let the community know he is urging the federal government to get its act together.

Specifically, to get its trade act together and help out the community's ailing major industrial players Essar Steel Algoma and Tenaris Algoma Tubes.

"We cannot continue to allow Canadian Steel workers' jobs to be put at risk by a weak and outdated federal trade remedy system," said Orazietti, in a statement circulated to reporters. "I strongly support the CSPA's (Canadian Steel Producers' Association) proposed improvements and I urge the federal government to step up and ensure that Canadian steel producers have a fair playing field that meets the new realities of the global marketplace."

While Orazietti is asking for action from the new Liberal government in Ottawa, he took a shot at the previous Conservative federal government for "ignoring" the issue.

SooToday and LOCAL2 journalists are at the ongoing press conference, so check back for full coverage on the announcement.

The following is the full text of a press release from MPP David Orazietti:

The proposed changes will help to ensure a fair trade environment for Canadian Steel workers.

“We cannot continue to allow Canadian Steel workers’ jobs to be put at risk by a weak and outdated federal trade remedy system,” said David Orazietti MPP for Sault Ste. Marie. “I strongly support the CSPA's proposed improvements and I urge the federal government to step up and ensure that Canadian steel producers have a fair playing field that meets the new realities of the global marketplace.”

The Canadian Steel Industry directly employs over 20,000 workers but their jobs are being seriously threatened by the dumping of foreign steel, most notably by China, India, Russia and Turkey.

In fact, two out of only three fully integrated steel producers in Canada have filed for protection under the Companies’ Creditors Arrangement Act (CCAA); Essar Steel Algoma on November 9, 2015 and U.S. Steel Canada (formerly Stelco) a year earlier.

The former Federal Conservative Government ignored this issue and their appointees on the Canadian International Trade Tribunal (CITT) have failed to recognize the harm done to Canadian producers.

In a letter dated December 1, 2015 to Prime Minister Justin Trudeau, Sault Ste. Marie, MPP David Orazietti called on the federal government to strengthen the current trade remedy process, which was set up more than 20 years ago.

Canadian Steel producers are some of the most efficient in the world and can compete on a fair and level playing field but many foreign steel producers do not have the same rules.

“A recent unfair and shortsighted ruling by the CITT deciding Canadian steel plate production is not being injured by dumped and subsidized steel imports makes it clear, more than ever, that the federal government needs to modernize Canada’s trade remedy system,” said Orazietti. “The negative effects of steel dumping are being felt directly by Canadian producers, suppliers and workers as well as their families who are losing their livelihoods. The time for action is now.”

To voice your support, sign the petition for fair trade rules for Canadian steel producers at www.FairTradeForSteel.ca.