Opera at the mall 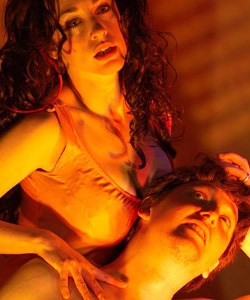 Tapestry New Opera Works, the folks who astounded Saultbies with Opera to Go in Boniferro Mill Works in 2004 are coming back to dazzle with blazing visual and auditory sensations sure to leave everyone tingling right down to their toes.

As part of Algoma Fall Festival 2006, they'll be presenting Nigredo Hotel in the Wellington Square Mall on November 4.

"Tapestry New Opera Works is dedicated to the development and production of new and original works of music theatre and opera," says their website.

At last night's launch of the festival, Algoma Fall Festival President Donna Hilsinger said she saw the production in Toronto and was awestruck by it.

The popular fall festival is bringing it to the Sault in the most novel of settings – the Wellington Square Mall.

"Well, we needed a big place for it," quipped Hilsinger.

And she was also singing the praises of the new festival marketers.

"Lucidia Communications has generously offered to donate its services to help promote the festival this year and tonight they launch our new website for the very first time," Hilsinger told assembled festival organizers and volunteers at the Water Tower Inn.

The website features multimedia presentations on many of the performers that will be featured this year and more video is being added soon, said Lucidia president Jeff Elgie.

Jean Marie Allard. a Lucidia client strategist, said the site is designed to offer visitors a taste of what they can expect from the festival.

"Nine performances running across four consecutive weekends, from October 13th to November 5th in eight different venues will take you on an adventurous journey around the world," said festival Artistic Director Wayne Strongman.

To see what the Algoma Fall Festival they've got planned for you, visit their brand new website.