'There’s a tremendous void that’s been left behind that has impacted the entire organization': OPP Comm. Hawkes
Aug 30, 2018 3:19 PM By: Jessica Owen 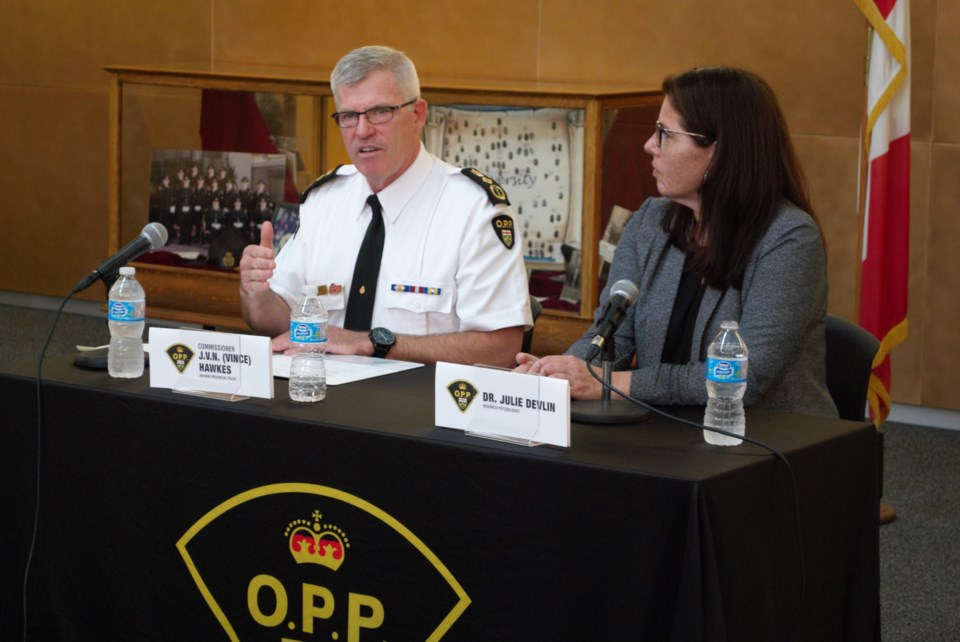 After the suicides of three OPP officers over the past month, including Sgt. Sylvain Routhier of Belleville and Det.-Insp. Paul Horne of Iroquois, the OPP have now unveiled a new mental-health strategy that will provide more support for officers.

“I would like to start by addressing the deaths of three of our members recently due to suicide. We’ve been dealing with the grief of our loss,” started Hawkes. “There’s a tremendous void that’s been left behind that has impacted the entire organization.”

“This is a very difficult time.”

The OPP will be working with partners toward a three-pronged approach to mental health that includes building awareness, reducing stigma and providing more member training and resources.

During his remarks, Hawkes outlined various programs already in place for officers, including wellness checks, mental-health training for officers and the introduction of the OPP Wellness Unit in 2014.

“I’ve outlined some of our programs at work that are helping our members... but we clearly need to do more,” said Hawke. “There are serious gaps and barriers that require further examination, review and evaluation.”

As a result, Hawkes then announced that the OPP will be undergoing an internal review of member suicides over the past five years, which will include round-table discussions with officers, families of members and experts in the field of mental health.

“We will enhance our existing strategies, we will examine the root causes and evaluate what works and what doesn’t through the eyes of lived experience members and their families,” said Hawkes.

“No one should suffer in silence.”

When the floor was opened, Hawkes fielded questions about the specific timeline for the plan, as well as specific statistics on officer deaths from suicide.

Hawkes indicated that over the last 30 years, there have been 24 active and nine retired members who have died from suicide that the OPP has documentation on.

When asked a question about these initiatives carrying over to also help officers in other units such as the Barrie Police Service or South Simcoe Police Service, Hawkes said that everything the OPP does of this nature is linked into the Ontario Association of Chiefs of Police, where they share everything they do with other police forces across the province.

“That’s one of the advantages of learning from others,” he said, also saying he met with other units on Wednesday as well as representatives from the provincial government to discuss the plan, including the Toronto Police Service. “We share in everything we do.”

Hawkes opened up with empathy about his own struggles while on the force, and the importance of existing resources.

“I’ve had some bad days, just like everyone else,” said Hawkes. “The wellness checks are just one piece of the whole strategy.”

When asked questions about fear and the ramifications on one’s career as a result of admitting to mental health struggles -- that is not necessarily unique to the police force -- Hawkes said that understanding can be achieved through knowledge.

“When it comes to fear, how do we overcome some of that fear? Some of that is knowledge,” he said. “One of the worst fears I hear from officers is, ‘If I say that, I’m going to lose my gun,’” said Hawkes. “There’s that perception that if they lose their gun they’re going to lose their authority. That’s devastating for a police officer.”

When asked if this exercise has resulted in OPP officers across the province being more compassionate or empathetic toward the general public when attending mental health or suicide calls, Hawkes said that community outreach is a major component of the new strategy.

“We’ve come a long way over 30 years of dealing with people who are in crisis,” said Hawkes.

“The biggest difference in how we train our officers, is (pushing) de-escalation. Basically, using your mouth before you use any type of force.”

Hawkes also indicated that corporate language is a major part of training.

“We are teaching officers not to use terms like ‘crazy’, and understanding that we don’t use terms like that anymore,” said Hawkes. “It’s all about dealing with someone who is going through a crisis.”

About the Author: Jessica Owen