99 percent of respondents to an NDP poll say MCTV's news coverage has deteriorated since cutbacks imposed by Bell Globemedia. Results released today by Sault Ste.
Mar 5, 2002 12:00 AM By: David Helwig 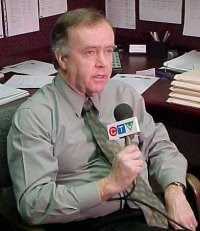 99 percent of respondents to an NDP poll say MCTV's news coverage has deteriorated since cutbacks imposed by Bell Globemedia.

"Northerners want their stations back. They want Bell Globemedia to keep its promise and give stations the staff and support they need to serve the North well," Martin said in a written release. "Clearly, Northerners believe that's not happening now."

245 people responded to the online poll between February 4 and 17.

Martin tells SooToday News that the majority of respondents were from Sault Ste. Marie.

The following are among responses received from Sault residents:

"It's become a dog's breakfast ... For example, during a recent snowstorm in the district, Highway 17 was closed from Batchewana to Wawa. The news [from Sudbury] said 'Sault Ste. Marie under a storm.' My daughter and I looked at each other and then out the window and there was not a flake in the sky." - TH

"They got a renewal of their license from the CRTC and then cut us out. I no longer watch CTV at all, since it is obvious that they do not care about this city at all." - MB

"I feel deceived. While [MCTV] said that there would be improved service, I can't see it .... [One night] more time was spent on a story about whether one would want their pets freeze dried or not than on Sault news .... As a business person I no longer support MCTV with my advertising needs." - SD

"I'm so insulted and offended that I don't watch CTV at all anymore. It doesn't matter what show is on, I refuse to watch." - SM