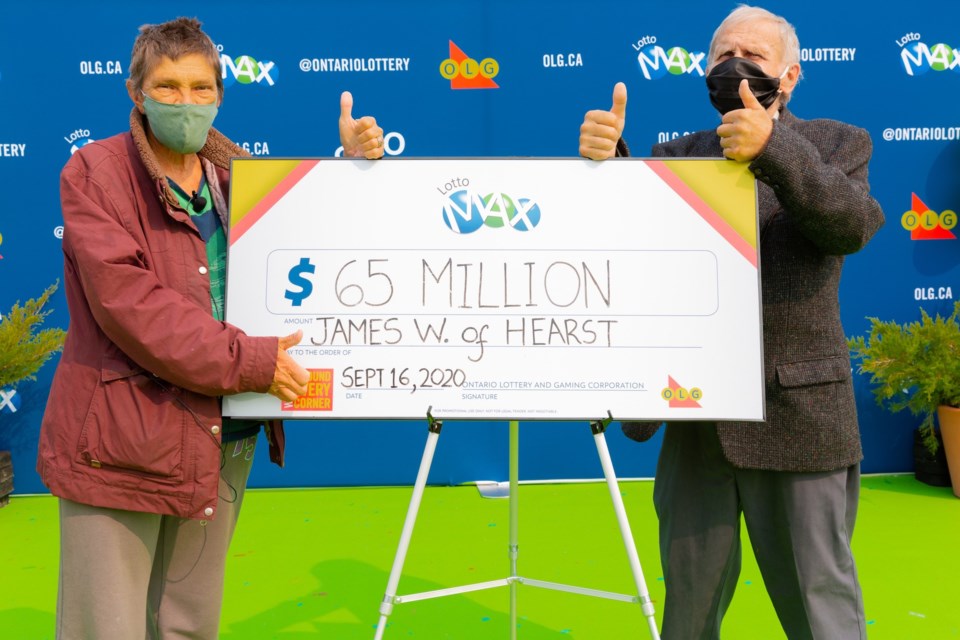 A 67-year-old retired electrical contractor from Hearst has won the Sept. 8 Lotto Max jackpot worth $65 million.

After hearing that the winning ticket had been sold in the Timiskaming/Cochrane region, James Wickman checked his numbers using the OLG Lottery App and discovered he had won.

He loaded his family into a rented coach to make the 10-hour drive to claim his prize in Toronto.

James Wickman of Hearst loaded 24 family members on a rented coach bus and drove almost 10 hours to OLG's Prize Centre in Toronto. He was excited and anxious to collect his massive $65 million jackpot from the Tuesday, Sept. 8, 2020 Lotto Max draw.

James was in his vehicle when he heard on the radio there was one winning ticket sold in the Timiskaming/Cochrane region for the $65 million Lotto Max draw and thought, "I just may be that winner."

He rushed home to check his ticket using the OLG Lottery App and saw a message that he had won $65 million.

"I showed my wife the message on the app, but she couldn't believe it and thought it was an error," said James. "So, I went to the store to have the ticket checked through the lottery terminal and that's when all the bells and whistles went off!"

James' daughter, one of his four adult children, was at the store with him when he got confirmation of the win. She was overwhelmed and called the rest of her siblings to share the tremendously good news.

James is a regular lottery player, buying one or two tickets a week. "I always ask the retailer for Quick Pick numbers and that's what won me the jackpot," he smiled.

Regarding plans for this life-changing windfall, James says he now has a team of advisors to help him with this monumental task. He is certain he wants to share the winnings with his four children and will set up trust funds for his 11 (soon to be 12) grandchildren.

"I want to make sure I set them up well for the rest of their lives." He then joked, "But I am still not sure what I am going to do with the other $64 million!"

Since its launch in September 2009, Ontario Lotto Max players have won over $5.7 billion, including 77 jackpot wins and 611 MaxMillions prizes, right across the province.

Lotto Max draws are twice a week – on Tuesdays and Fridays. For each $5 play, players receive three sets of seven numbers ranging from one to fifty. Players must match all seven numbers, in any one set, to win the jackpot or the MaxMillions prizes.

The winning ticket was purchased at the Canadian Tire Gas Bar on Front Street in Hearst.