Councillors will be asked to seize the controversial vessel and offer it to Chicago businessman Peter Gregos-Nicols
Apr 19, 2018 11:00 AM By: David Helwig 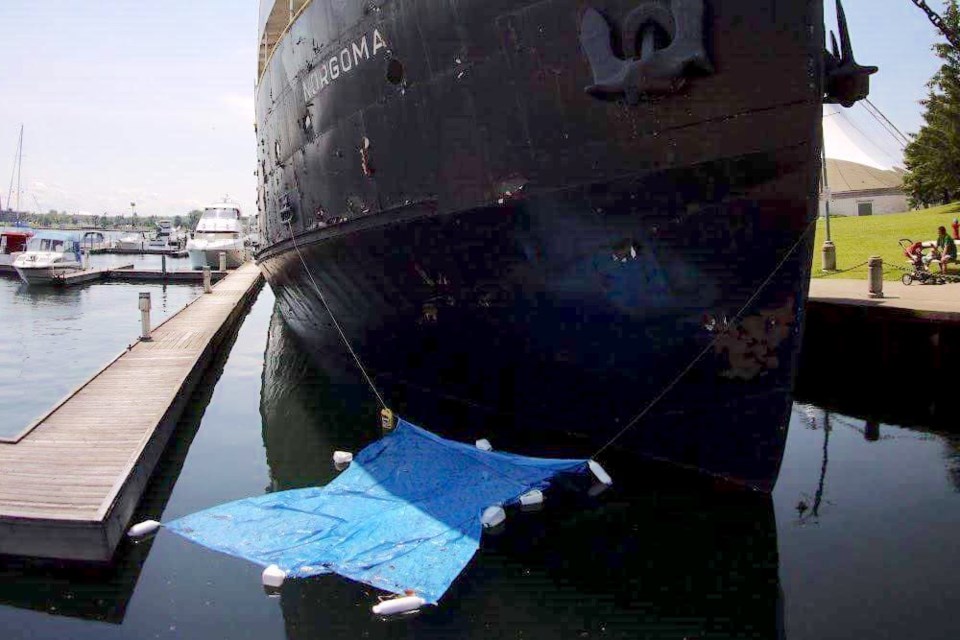 The Ontario Ministry of the Environment and Climate Change contacted the city last year with concerns about a tarp that was seen floating in the Bondar Marina near the 185-foot-long vessel. Michael Purvis/SooToday

Sault College nursing student Chelsea Wieja is expected to make her local political debut next week, helping lead the charge to save the M.S. Norgoma.

The former Hollywood Joe's hairstylist/colourist was chosen last night to make the case at Monday's City Council meeting for the museum ship's preservation, representing both the city's municipal heritage committee and cultural advisory board.

Representatives of the two groups huddled in a computer training room at the Civic Centre to plan strategy for the presentation to council.

Sean Meades, a member of both organizations, will prepare talking points for Wieja.

Meades plans to focus largely on the Norgoma's cultural value and the city's financial investment.

Councillors will be asked Monday to vote on seizing the Norgoma to offer it to Chicago businessman Peter Gregos-Nicols, who wants to remove it from the Sault and turn it into a travelling maritime museum.

The decision was on council's agenda two weeks ago but was deferred to Monday's meeting.

Ontario's Ministry of the Environment and Climate Change contacted the city last summer with concerns about a tarp that was seen floating in the Bondar Marina, collecting lead-contaminated paint chips falling from the 68-year-old vessel.

The province wants to know the city's plan for both the paint chips and the boat.

Lloyd Beilhartz, chairperson of the municipal heritage committee, and Chris Rous, chair of the cultural advisory board, will be present Monday to answer any tough questions from councillors.

The two committees have also submitted a joint written report to council, but Rous cautioned Wieja to avoid just reading from that document because councillors will already be familiar with it.

"They're all very smart people. They'll read it," Rous said.

Monday's presentation should instead focus on "making our points . . . it needs to be very clear," Rous advised.

Historic images of Norgoma on the St. Marys River will also form part of Monday's presentation.

A representative from the St. Mary's River Marine Heritage Centre, which has owned the rusting package freighter and former car ferry for the past 37 years, is also expected to speak at Monday's council meeting.