Norgoma and other vessels honoured

With how easy it is to access other cities from Sault Ste. Marie, it may be hard to believe that for a period there was only one way in and out of the area. Citizens of Sault Ste.
Sep 16, 2011 11:55 PM By: Brad Coccimiglio 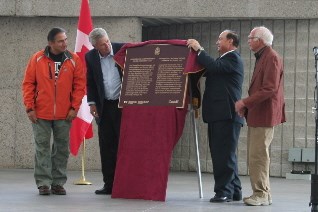 With how easy it is to access other cities from Sault Ste. Marie, it may be hard to believe that for a period there was only one way in and out of the area.

Citizens of Sault Ste. Marie will have a permanent reminder every time they pass by the Museum Ship Norgoma while walking along the boardwalk.

With Sault MP Bryan Hayes and other local dignitaries in attendance, a Historic Sites and Monuments Board of Canada plaque was unveiled at the Roberta Bondar Park Tent Pavilion.

“The use of passenger and packet freighters on the upper Great Lakes contributed to the settlement and development of northern Ontario,” said Hayes in making the announcement.”(The plaque) is a symbol of recognition and celebration of the importance of passenger and packet freighters to the settlement and economic development of coastal communities along the upper Great Lakes.”

In operation between 1856 and 1967, there was a time when passenger and packet freighters were the only way to travel to the area and transport goods and people to the area.

During the initial ceremony, Chief Dean Sayers of Batchewana First Nation spoke of how the freighters played a roll, not only as people immigrated from Europe, but also for those already living in the area.

“My father is 90-years-old and he talked to us all of the time about the ships coming into our villages when his father was chief of Sault Ste. Marie,” said Sayers. “They rode their boats and latched onto these bigger boats with their canoes and (the freighters) would pull them back to their villages.”

The plaque is expected to be displayed next week near the Norgoma.