No food for you, Chris Sky: Controversial anti-masking activist turned away by Sault eatery

The Breakfast Pig was asked to feed Sky and his 'freedom convoy' for free, but the anti-masker's stopover in the Sault has left a bad taste in Angela Caputo's mouth
Apr 27, 2021 5:57 PM By: James Hopkin 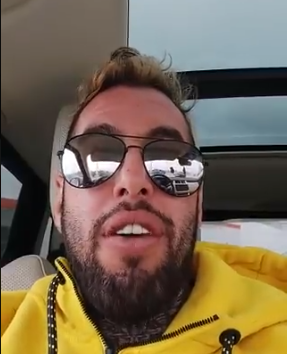 Chris Saccoccia, also known as Chris Sky, is seen in this file photo.

Restaurateur Angela Caputo was shocked when a local supporter of controversial anti-mask activist Chris Saccoccia, also known as Chris Sky, called up The Breakfast Pig in hopes of scoring a free breakfast for Sky and three members of his so-called ‘freedom convoy’ for their planned stop in Sault Ste. Marie Wednesday.

Sky is leading a convoy that started in British Columbia and is making its way across the country, holding rallies in a number of cities.

“I said, are you asking me to provide him with free food? He’s like, yeah. I’m like, why would I do that? and he said, because he is travelling around Canada on his dime - those were his exact words - fighting for our freedom,” said Caputo of the interaction over the phone. “I was honestly shocked, but I just said I’m not a fan of Chris Sky or his antics, so I'm definitely going to turn you down on giving him anything for free.”

Caputo has since taken to social media to share her distaste for Sky publicly.

“Someone like Chris Sky is very dangerous - he’s been around thousands of unmasked people in the last month, and now, he’s coming here,” said Caputo, speaking to SooToday Tuesday afternoon. “If a bunch of people here are around him, it could potentially spark another outbreak, which is bad for everyone in the community and puts all of us behind.”

“A couple people on Facebook have said to me, ‘he’s fighting for you’, but he’s not fighting for me as a small business owner. This is putting small business back,” she continued. “If an outbreak happens, we’re going to be forced to stay closed for a longer period of time, which is not what we want.”

Because Ontario is restricting entry into the province under its enhanced COVID-19 restrictions, OPP stopped Sky’s eastbound ‘freedom convoy’ Monday afternoon. Sky posted on social media that he was allowed through because he is a resident of Ontario.

One of Sky’s supporters in the Sault shared a video message from the anti-masking activist on social media Tuesday, wishing people a “great protest” at Bellevue Park later this week, referencing the ‘Stand for Freedom’ gathering.

“Hello, Sault Ste. Marie! I’m sorry I couldn’t be there this Friday at Bellevue Park, but I have my own secret mission to take care of, and I promise you all will not be disappointed to find out what I’ve been up to,” Sky said.

Caputo says there’s a “strong possibility” that Sky could be an asymptomatic carrier of COVID-19 right now due to his appearances at public gatherings, and feels that could wreak havoc on the Sault should he draw a crowd while passing through.

The owner-slash-operator of the Breakfast Pig has since reached out to the mayor and her ward councillors.

“People are getting sick, and just because we haven’t seen a lot of deaths from it or a lot of sickness doesn’t mean that we won’t,” Caputo said.