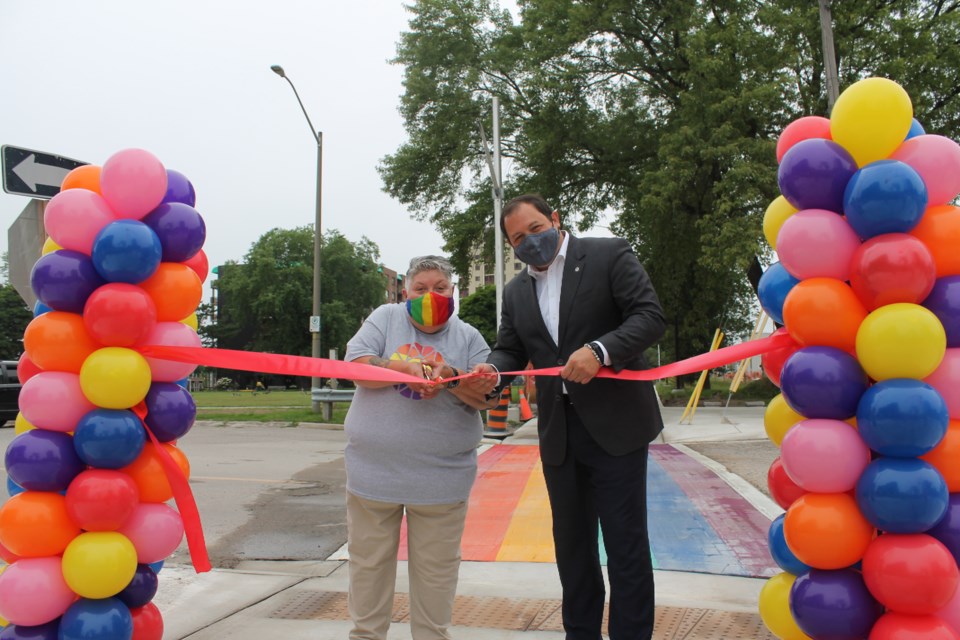 A new rainbow crosswalk was unveiled on Monday at the southern portion of the intersection of Bay Street and East Street in dedication to the local LGBTQ2SI community.

The following is a news release issued today by the City of Sault Ste. Marie:

The City of Sault Ste. Marie unveiled a new rainbow crosswalk on Monday located at the southern portion of the intersection of Bay Street and East Street in dedication to the local LGBTQ2SI (Lesbian, Gay, Bisexual, Transgender, Queer, Two-Spirit) community.

As a result of the community engagement process that formed the basis of the FutureSSM final report and recommendations, four pillars were developed to guide community development: Economic Diversity and Growth, Cultural Vitality, Environmental Sustainability and Social Equity.

The ‘Future State’ envisioned for the Social Equity pillar stated, “Sault Ste. Marie will be a welcoming and inclusive community where everyone is valued and respected, has access to an acceptable standard of living, can fully engage and participate in all aspects of community life, and is able to realize their full potential.” Staff identified the establishment of a rainbow crosswalk as a means to help fulfil the aforementioned vision, and it was approved by City Council on July 13, 2020.

“It is important that we all work together to ensure that Sault Ste. Marie is a welcoming and inclusive community, a place where everyone feels at home and feels that they belong,” said Mayor Christian Provenzano. “I continue to be impressed by the leadership and efforts of our community at-large, in particular Sault Pride, and I’m happy to unveil our Pride crosswalk together.”

The following is what Susan Rajamaki, chair of Sault Pride had to say about today’s unveiling:

“Our Queer history in Sault Ste. Marie has been going on for many years, with a true queer underground, and unfortunately many of those folks who were a big part of the LGBTQ2SI underground in Sault Ste. Marie are no longer with us to see this unveiling. I am sure those folks are celebrating that a visible symbol is being put forth to show how far our city has come, because for them there was not a time they could openly celebrate who they were.

"Murray Carson, who organized many dance events through an early organization called Algoma Pride comprised of volunteers of the community, Wendy Elizabeth Houle a proud member of our community who fought for trans recognition and rights for all trans folk and worked on many pride events, and Bob Goddere, Mother Goddere, as he was known to most, hosted over two decades worth of queer dance parties in the basement of his small town house. He was the central figure of Sault Ste Marie's gay underground - its organizer, therapist and archivist in the 70's and 80's. These folks are only a small list of Saultites that were in the early fight to create a culture of diversity and acceptance in Sault Ste. Marie.

"Honouring their memory and tireless work and yes, many times in fear, this Rainbow Crosswalk is a proud moment for all of the community to celebrate the work that has happened to make our community a much more open, diverse and accepting one. However, we need to recognize there is always work to be done. Especially today, with world events against trans folk and POC, we all need to stand against such hate that happens here in our community as well.

"The six stripes in the widely popularized rainbow flag of today each represent an idea that resonates with LGBTQ2SI people: Red for life, Orange for healing, Yellow for sunlight, Green for nature, Blue for peace, and Purple for spirit.

"This installation of a rainbow crosswalk is a definite viable symbol to the LGBTQ2SI here that the city stands with us against all forms of discrimination and hate. It is yet another stepping stone in the right direction that the City of Sault Ste. Marie is taking to be a more inclusive, diverse and accepting community, not only for the queer community, but for all who call Sault Ste. Marie home.”