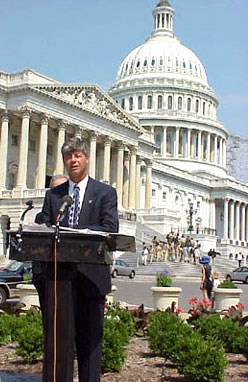 WASHINGTON - The Great Lakes Shipwreck Museum received a grant from the Institute of Museum and Library Services (IMLS) to fund the completion of a maritime museum Surfboat House Exhibit describing the story of the United States Life-Saving Service.

"As much as we value our Great Lakes as the nation's greatest natural resource, we also must value and preserve the history," Stupak said. "This new exhibit will show how the Life-Saving boats did so much to protect sailors on the sometimes treacherous Lakes and seaways."

The museum opened the new exhibit in the 1923 U.S. Coast Guard Surfboat House on the site.

This building is the original structure used by the U.S. Coast Guard Rescue Station at Whitefish Point between 1923 and 1951, to launch hand-pulled surfboats, manned by Coast Guard crews, to come to the aid of vessels in distress on Lake Superior's Shipwreck Coast.

The funding will pay for exhibits that tell the dramatic story of the Coast Guard, and of its predecessor U.S. Life-Saving Service on this dangerous shoreline.

The men and women of the Life-Saving Service were known as the "Storm Warriors." whose motto was, "You have to go out, but you don't have to come back."

This funding is matched by a grant from Michigan Humanities Council and private donors.

IMLS funding will pay for a full-size mannequin for the exhibit; exhibit cases and case covers, also known as vitrines; video presentation equipment showing historic footage of Life-Saving personnel in action; and other associated exhibition expenses.

The exhibit already features a replica 26-foot Beebe-McClellan Surfboat, complete with mast, oars, ready to launch; and a replica Beach Cart, used by the Life-Saving Service to carry equipment to the site of a shipwreck.

The Surfboat is supported by a grant from the TEA-21 program of Michigan Department of Transportation, and the Beach Cart through a private donor.

"This funding will help pay for fabrication and installation of interpretive exhibits that tell the exciting story of life saving efforts performed by the U.S. Life Saving Service and Coast Guard.

The many thousands of visitors who travel to Whitefish Point each year will now be able to learn of the heroic rescues, hardship and loneliness surfmen and their families shared while manning the desolate stations along "Lake Superior's Shipwreck Coast."

A special one-day event is offered annually on November 10 in remembrance of the loss of the famous steamer Edmund Fitzgerald.