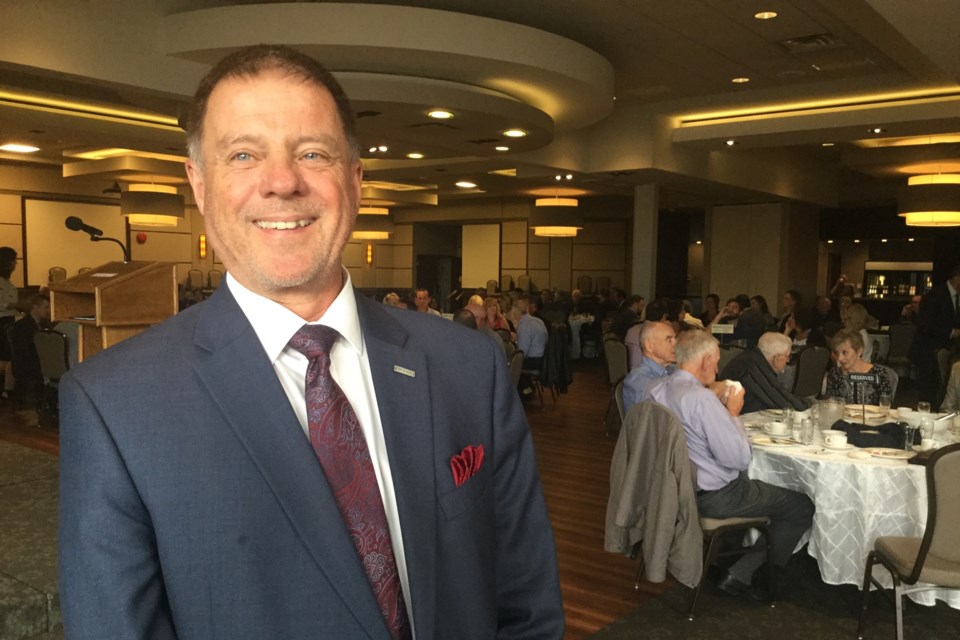 "I'm pleased to announce that we are in the midst of some momentous initiatives right now," McQuade told the Sault Ste. Marie Chamber of Commerce's 130th anniversary luncheon this afternoon at the Marconi Event Centre.

McQuade said the three main projects will take two years to complete at a cost of about $300 million dollars.

"First off, we're building a second ladle metallurgy furnace. This is a steel refining facility where we use electromagnetic stirring to refine the chemistry and heat up the steel to the optimal temperature for casting," he said.

"We currently only have one ladle-met furnace and it's become a significant bottleneck in our process."

"This new facility will deliver another 100,000 tons a year and greatly improve our ability to add more value-added grades. The project team is in place. Construction is underway," McQuade told chamber members.

"This is the facility where we go from liquid steel to a finished hot-roll coiled sheet in approximately 30 minutes. This complex is the only one of its kind in Canada and reflects the state-of-the-art technology that's being build around the world."

"Current capacity of this facility is about 2.1 million tons per annum and we're taking it to 2.4 million tons."

New DSPC segments were commissioned the first week of this month and McQuade says they're performing "exceptionally well."

"We're adding more water cooling capability, more roll grinders and other upgraded elements to increase the volume and improve the reliability and increase our grade capability off of this mill."

The third major capital project underway at the Sault steelmaker is a modernization of the plate mill.

"Our plate mill is the only one in Canada, unique in that it's a combination of plate and strip complex, which gives us the ability to flex production between those two products, depending on customer demand," McQuade said.

The three large projects and other smaller but important ones have been funded with $150 million in loans and grants from the federal and provincial governments.

"Having all of these projects on the go simultaneously is more than we can handle on our own, so we are drawing on external expertise and resources here in Sault Ste. Marie and across the globe."

"It's a great opportunity for our employees and an exciting time for both the company and the community," McQuade said.

Since January 2018, he said the company has hired 368 full-time employees.

"That doesn't include our summer students. On average, about 20 per cent of that group have been hired from outside the community."

McQuade said his company is helping Mayor Chrisitian Provenzano and FutureSSM build the Sault's population to 100,000 by 2037.

Sault Ste. Marie Chamber of Commerce was founded by 40 local businessmen on July 25, 1889.