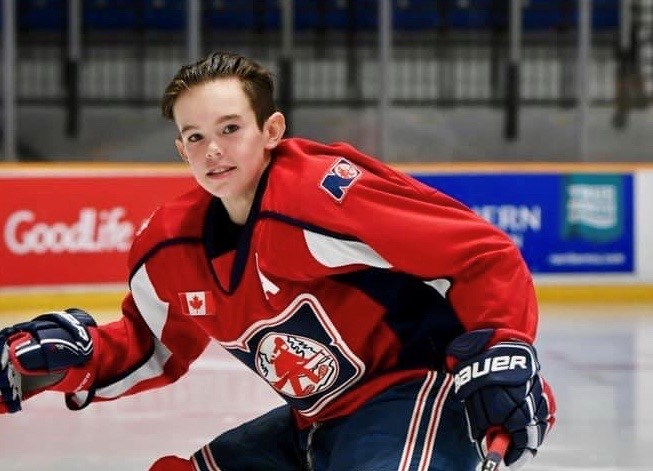 NORTH BAY - Back in the 1950s to the '70s numbers on a players' hockey jersey were handed out primarily through their position.

Fast forward to 2021, when numbers like 97 and 88 are common and worn by youngsters idolizing the players like McDavid and Kane who wear those high digits on their jerseys.

But in North Bay, the number 71  that Noah Dugas wore has a lot more meaning than a position, or a certain player ever will.

"His hockey number was 71 so it is no coincidence that 7 lives were saved by 1 special boy," she said.

Of course, Jody is talking about her 13-year-old son and well-known North Bay Trappers hockey player Noah Dugas who passed away from a stroke in November.

April 7 is a significant day with a sad, but inspiring hockey connection. It is the anniversary of the death of Logan Boulet, who died in the tragic Humboldt Broncos bus crash three years ago.

Six people across Canada benefited from Boulet's organs and the Logan Boulet Effect soon followed. Nearly 147,000 Canadians registered to be donors in the two months after learning the player had signed his donor card.

It also led to Green Shirt Day every April 7, the anniversary of Boulet's passing, to promote organ donor awareness and registration across Canada.

The Dugas family can relate as Noah was able to give seven of his organs to help others.

"Organ donation awareness is most definitely something our family supports and believes in its importance," said Dugas.

"We understand it is not an easy discussion to have with your loved ones especially with our youth however knowing your family wishes in the event of an accident can prove to be life-saving. In his act of selflessness, Noah was able to enrich seven lives and we take tremendous comfort in knowing that his spirit continues to live on. Learning a little about how his gifts impacted his recipients and their families was something that has meant a lot to us in our moments of grief."

Much like the Boulet Effect, the Dugas' felt the power and the support from the hockey community which rallied to support the family locally and beyond.

"Our thoughts go out to all the Humboldt Broncos and families on this third anniversary," she said.

"We are thankful to the Logan Boulet family who has brought awareness to organ donation by green shirt day in remembrance of their son. Currently, on the beadonor.ca website it states that 1,600 people in Ontario are awaiting an organ transplant."

Dugas notes that an estimated 35 per cent of Ontarians are registered donors but her hometown is doing much better than that.

"North Bay is doing well actually ranked second with 58 per cent registered however I believe we can do better."

In memory of their son, the Dugas family is in the planning stages of creating a NoahStrong Foundation; an organization the family hopes will also bring more awareness to the organ donation cause.

"We have gathered a team together and are currently working on a NoahStrong organization that will honour Noah’s character as well as give back to our community who supported us through our difficult time," she said.

"We are forever grateful for the continued support from family, friends, and our wonderful community. We are excited to launch the NoahStrong organization in the near future. Stay tuned!"

As for coping with Noah's loss, Jody says she is doing alright as she and her husband are back to work and trying to stay positive.

That's the way she feels Noah would want it.

"Noah taught us many things, one important lesson is to live in the moment; live for today," she said.

"He continues to surround us every day with his amazing spirit. We will do our best to live like he did, with kindness, selflessness, and love for others. The NoahStong movement will allow us to do all of those things."

– BayToday, with files from Canadian Press