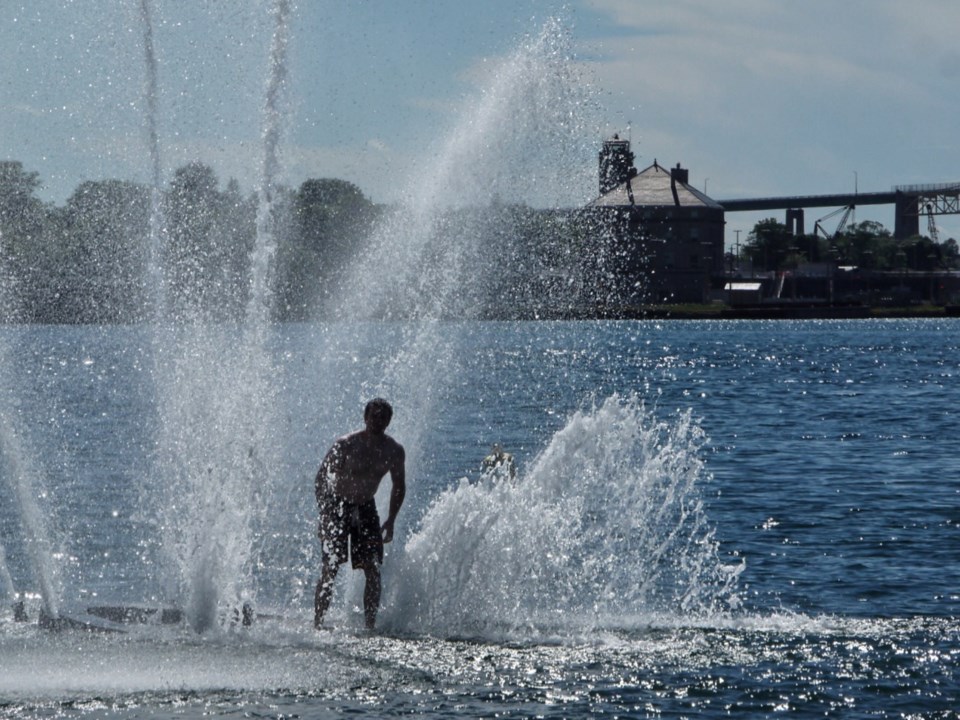 A man swims out to the Millennium Fountain in this July, 2016 file photo. Michael Purvis/SooToday

A lack of local trained divers.

And dudes, like the one shown in this 2016 SooToday photograph, who endangered our delicate Millennium Fountain by climbing all over it.

It was all too much for the 16-year-old waterfront landmark in Clergue Park.

Earlier this year, Myers and her Ward 2 ward-buddy Sandra Hollingsworth had asked that council reconsider a decision made in last year's budget deliberations to scrap the beautiful night-lit waterfront fountain

But after reading a report prepared by Mike Blanchard, the city's manager of equipment and building maintenance, Myers was ready to dry-dock the fountain on the understanding that city staff will prepare a second report on the possibility of putting a land-based fountain in Clergue Park.

"This sort of fountain is not designed... to withstand the waterways of the St. Marys River," Myers told her fellow councillors.

"Ironically, I was away this past weekend and golfing on a course where they had the identical fountain on the course. This is the type of fountain you would find on a golf course. It's not something you would find in a river."

Here, as compiled by Blanchard, are the issues city staff were facing to keep the fountain flowing:
It costs about $24,700 a year to operate the Millennium Fountain.
On top of that, the cost of doing needed repairs on the fountain to prepare it for the 2017 summer season was estimated at an additional $25,000.
As Councillor Myers spoke at the Civic Centre, the Millennium Fountain had not yet been placed in the river.
Now, it won't be.
Splash pad is short of cash
Meanwhile, City Council passed the following resolution on the city's overdue splash pad initiative:

Seconder Councillor P. Christian
Whereas on August 22, 2016 City Council passed a resolution brought forward on behalf of the Mayor’s Committee on Canada 150 asking staff to look at various means of funding to build a splash pad as the city's community legacy project for Canada 150; and
Whereas in the staff report to council dated March 20, 2017 it was indicated that the project cost is approximately $575,000 and the timeline for construction of a splash pad would be dependent upon fund-raising and submitting applications to various funding opportunities; and
Whereas to date there is about $60,000 committed to this project including $25,000 of city funds previously approved and with applications underway for additional funding; however, timelines of all funding possibilities are such that it would take at least one year to align the total funding envelope and thus no longer be a Canada 150 legacy project,
Now therefore be it resolved that should council wish to proceed with building a splash pad in 2017, staff be directed to report back within one month and identify all possible sources of city funds including parks reserves and include identifying any city assets that could be liquidated with funds used to support the splash pad project;
Further be it resolved that all fund-raising efforts and applications for funding continue as planned.

The Downtown Association and others don't like the splash pad's proposed location in Bellevue Park and have been pushing to have it moved to Clergue Park.

"That's not a decision that council is willing to entertain unless it comes forward as a reconsideration motion," Christian said at Monday's meeting.

"No one has approached me with that and it was pretty clear at the meeting where we voted on it that Bellevue was the preferred choice by the community and by council for all the reasons that it the best choice."

"At this point, there's no intent to bring it forward to council because council's already voted on it," Christian said.