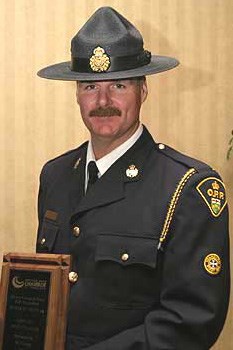 Today's awards were presented at the Holiday Inn with about 180 Chamber of Commerce members and other members of the general public in attendance.

Selection criteria included continued efforts in pursuit of excellence, high standards of performance and dedication, performance above and beyond the call of duty, community-mindedness and bravery.

The following is Constable Speakman's commendation, as prepared by the OPP:

Constable Brian Speakman has been a member of the Ontario Provincial Police for 18 years.

In June 1986, Brian packed up and moved from the G.T.R. to begin his policing career at Central Patricia Detachment (Pickle Lake).

Brian served in Pickle Lake until October 1988 when he and his wife Dorothy packed up and moved to Sioux Lookout where Brian Joined the North West Patrol Unit, providing policing to remote northern First Nations communities.

Brain and Dorothy have three children, Sean, Lauren and Frasier.

On July 5, 1993, Brian and his family moved to Sault Ste. Marie, where Brian joined the local detachment.

Constable Speakman has received numerous letters of commendation from the communities in which he has served.

His policing career has involved him in various lines work from Detective Constable, to Crisis Negotiator to Wescam Operator.

Whatever task Constable Speakman has been involved with has resulted in a 110% effort on his part.

His peers know him as an officer who will leave no rock unturned when he is engaged in an investigation.

In October of 2000, Constable Speakman began an investigation into the theft of timber from three properties in Havilland Township.

Constable Speakman worked on this investigation from October through September 2001 when an arrest was made.

This investigation resulted in three counts of Theft Over $5,000 being laid against a local resident.

The value of the trees illegally taken was estimated to be worth $110,594.

Constable Speakman completed this investigation and completed an 862-page Crown Brief while continuing to participate in his uniformed platoon duties.

This case was resolved in September 2003 with a plea of guilty and a restitution agreement being worked out for the three victims.

Constable Speakman’s steadfast investigation, attention to detail and many hours of his own time given to the successful completion of this case sets him out as an exemplary member to his peers and colleagues.