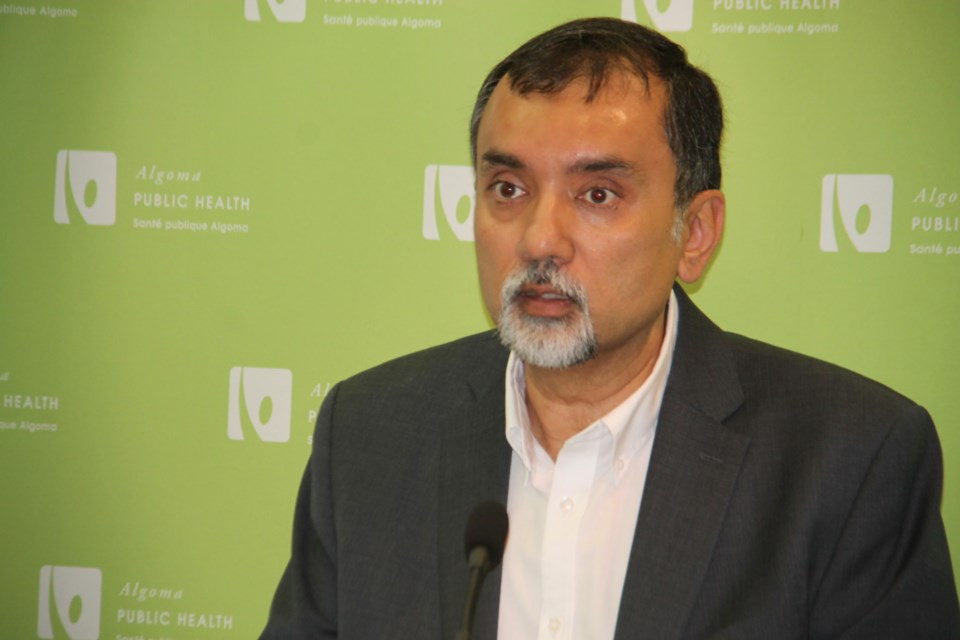 Gandhi, along with Dr. Marlene Spruyt, APH medical officer of health and CEO, emphasized the importance of childhood vaccinations and voiced medical community concerns regarding ‘vaccination hesitancy,’ a trend developing in some parts of Canada and the rest of the world in which parents are choosing not to vaccinate their children based on the belief that vaccinations do more harm than good.

“We know that most parents continue to vaccinate their children and that’s obviously a very, very good thing. However, we also recognize that vaccine hesitancy is becoming a phenomenon throughout the world. The World Health Organization (WHO) has actually listed vaccine hesitancy as one of the top threats to global health care and I find that quite shocking, frankly,” Gandhi said.

The internet, Gandhi said, is the prime culprit.

Concerned that vaccine hesitancy may spread to the Algoma region and the rest of Ontario and Canada, Gandhi said “63 per cent of all parents...look at the internet for information on vaccines and unfortunately the internet is full of a lot of information that is, quite frankly, not scientifically sound and is not in the best interest of children.”

“Vaccines work and vaccines are safe. All vaccines in Canada have gone through multiple stages of trials and multiple stages of testing to prove they are safe. Not only that, after they’re tested, all vaccines are tracked even after they’re given. As a family physician myself, when I give a vaccine to someone, I’m required to write down the lot number, the batch number, so we can track these vaccines and make sure adverse events don’t occur, and in the rare cases when they do occur, we can track them back to their source,” Gandhi said.

Because of vaccine hesitancy south of the border, Gandhi said the U.S. recently almost lost its measles-free status from the WHO.

“That’s a warning shot to us in Canada.”

Spruyt said in Algoma, there is 96.4 per cent vaccination coverage for seven year old school children and 98.5 per cent coverage for 17 year olds against measles.

Measles may cause pneumonia, brain inflammation and other health problems even years after the initial infection.

Spruyt told SooToday there are good vaccination rates, within Algoma, against tetanus and diphtheria, with slightly lower coverage against meningitis.

“It still concerns me that the vaccination coverage rate for meningitis is only 80 per cent (in Algoma). It has a high fatality rate and high disability rate. It’s rare…(but) it surprises me that people don’t run 100 per cent to get that vaccine,” Spruyt said.

“In Algoma our vaccination rates are quite high and we have good vaccine coverage, but can see in other areas of the country and the world that is not the current situation. We see increasingly that individuals and families are making decisions about vaccines based on information they are exposed to via social media, opinions from individuals who may lack full understanding of the evidence that supports the benefits of vaccines,” Spruyt said.

“We want to provide for the residents of Ontario good, high quality, tested information on the safety and efficacy of vaccines so we can fight against vaccine hesitancy,” Gandhi said as flu shot season approaches, issuing a reminder the flu can be a deadly illness.

“Last year was considered to be a mild flu season in Canada…(but) there were over 12,000 people across this country that were hospitalized as a result of complications from the flu. 3,600 people died, and that’s in a mild season,” Gandhi said, adding flu shot vaccination rates are low.

“There are campaigns out there (on social media) by people who are hesitant about vaccines, saying some diseases are benign and self-limited, that they don’t really cause long term side effects and that most people recover from them. There are campaigns that say these vaccines aren’t properly tested and cause more harm than the actual diseases do,” said Gandhi, speaking to SooToday.

Some anti-vaccine campaigners state vaccines may cause autism in children.

“There was a report dating back to 1992, a very badly done report that suggested vaccines can cause autism but that report (released by a U.K. doctor) has been debunked at least a hundred times. The guy who wrote it has had his license revoked...it was a terrible job,” Gandhi said.

Gandhi, on an OMA tour combating vaccine hesitancy, said he doesn’t believe there has been an increase in autism, but rather, greater awareness of how broad the autism spectrum is.

Gandhi said there are pockets in Ontario where adult vaccination rates are low, specifically in some areas of Toronto, southwestern Ontario and the remote north, the OMA president reiterating “I think it’s mostly because of social media, where people are spreading false information or inaccurate information.”

Gandhi said measles outbreaks, in particular, have been on the increase in Ontario.

“The amount is so low it can’t do any harm,” Gandhi said.

Neither Ghandi or Spruyt are calling for mandatory vaccination for the general population, but fully support the existing law which stipulates schoolchildren must be immunized with a group of vaccines (religious, conscientious objectors must sign a form exempting their children from vaccination, and those with certain medical conditions may also able be exempted with a doctor’s note).

Over the years, vaccines have led to the elimination or control of smallpox, polio, diphtheria, measles and whooping cough, those diseases having caused illness and even death for children.

Seven new forest fires confirmed in the region on Wednesday
Jul 8, 2020 7:26 PM
Comments
We welcome your feedback and encourage you to share your thoughts. We ask that you be respectful of others and their points of view, refrain from personal attacks and stay on topic. To learn about our commenting policies and how we moderate, please read our Community Guidelines.