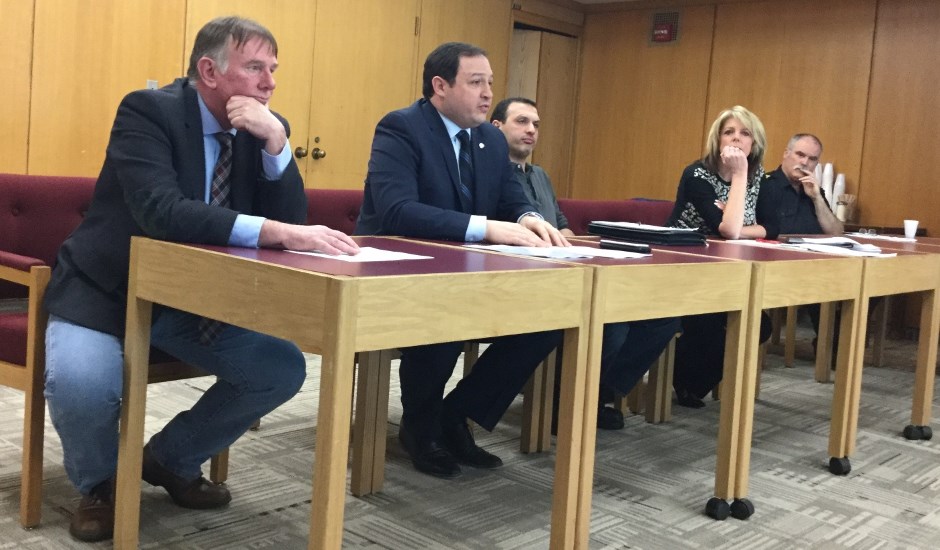 "I think it is strongly in the best interests of the residents of the community that EMS stay under the city's management and that DSSMSSAB enter into an agreement with the city to continue to provide that service." - Sault Ste. Marie Mayor Christian Provenzano. Photo by David Helwig/SooToday. March 17, 2016.

With Chief Administrative Officer Al Horsman at his side, Mayor Christian Provenzano appeared at last night's meeting of the District of Sault Ste. Marie Social Services Administration Board.

The mayor asked board members to consider entering another agreement for emergency medical services (EMS) with the city, similar to the one it decided last October to terminate effective September 25 of this year.

Mayor Provenzano acknowledged that he hadn't yet discussed his initiative with City Council.

He said he'll do that once he's seen the social services administration board (DSSMSSAB)'s transition plan to take over EMS land ambulance services.

"But in advance of that," the mayor said, "I wanted to make it clear to this board that it seemed to me that it's in the best interest of the community that it maintain a certain amount of operational control over EMS. And that we can enter into an agreement that's satisfactory both to the city and to DSSMSSAB.

Provenzano acknowledged that there may have been historic dissatisfactions within DSSMSSAB about service levels.

"I think that we've done a lot this year to address those issues. As you're aware, there's a transition plan underway to increase EMS service. I think that's positive. I think that's been led by [Fire Chief Mike Figliola] and we'll see improved service in both the City of Sault Ste. Marie and in the region."

"The one area that I think should largely remain under the management and supervision of the city is EMS."

"I think it is strongly in the best interests of the residents of the community that EMS stay under the city's management and that DSSMSSAB enter into an agreement with the city to continue to provide that service."

"We're currently licensed to provide it. We have the wherewithal to provide it. I think there are a lot of positive operational efficiencies that can occur as a result of that resting with the city," the mayor said.

"Thank you very much for your comments," said DSSMSSAB Chair Janet Gawne.

"We'll certainly take them under consideration."