Mark B. packs it in

Mark Brown, the Ward 1 City Council candidate who's been warned he'll be charged with trespassing if he enters the Civic Centre, sent the following E-mail this morning to Deputy City Clerk Malcolm White.
May 5, 2003 10:43 AM By: David Helwig 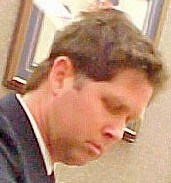 Mark Brown, the Ward 1 City Council candidate who's been warned he'll be charged with trespassing if he enters the Civic Centre, sent the following E-mail this morning to Deputy City Clerk Malcolm White.

Dr. Mr. White (or Ms. Irving if you have returned), I would like to attend the Clerk's office at City Hall in order to withdraw my nomination for Ward 1 councillor. Please advise. Regards, Mark Brown Citizen of Sault Ste. Marie

At 10:59 p.m. last night, Brown posted some severe criticisms of Ward 1 Councillor David Orazietti for running for the provincial Liberals without resigning his Council seat.

"By holding both legally identifiable positions simultaneously he is, at the very least, in direct violation of the spirit of the Public Service Act," Brown wrote.

At 3:04 a.m. today, a poster named Huh?????? responded: "Running in a ward, that you do not actually reside in, is not illegal. However, it is in direct violation of the 'spirit' of a municipal election."

At 6:34 a.m., Brown responded with the following posting:

So are you saying that you think that the Mr. Orazietti should act with less integrity than City Hall Staff?

But hey, lead by example I always say...

I will be withdrawing my so-called "unethical" Ward 1 nomination.

Will Mr. Orazietti act in the same ethical fashion as I, an ordinary citizen, have just pledged to act?

I'll be looking for his resignation from City Council or Provincial Liberal Candidacy immediately.

Which unethically held position will you resign from Mr. Orazietti?

The choice is yours.