Love according to Zuke: 'People who want to be a thing should be a thing'

Today is a day for lovers. Hearts and cupids and teddybears are everywhere, and convention tells us to declare our love with gifts and sappy sentiments. 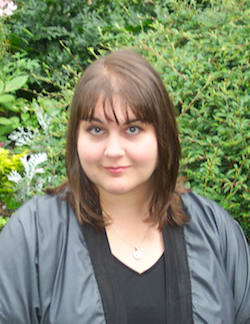 Today is a day for lovers.

Hearts and cupids and teddybears are everywhere, and convention tells us to declare our love with gifts and sappy sentiments.

Chocolatiers, florists, and restaurants are swamped, and the powers that be at Hallmark headquarters might be found swimming through mountains of cash.

Yes, there are a number of widely accepted traditions that go along with Valentine's Day, so SooToday decided to speak with someone who is full of love but far from conventional.

By day, Amanda Zuke is a long-term care provider.

But that's where normal ends.

In her off time, Zuke is a certified wedding officiant with All Seasons Weddings who will join any two people in any situation under any circumstance at any location.

She told us of a ceremony hosted in a yoga studio for "a lovely Buddhist couple" who broke the wedding into a variety of acts and involved all their guests in the celebration.

The waterfront moose factored into another of Zuke's weddings as she performed her very first same-sex ceremony.

"They saw the moose and fell in love with it and decided it would be the anchor for their big day. It was so much fun," she told us.

"I'm really lucky in that when couples book with me, they seem to more often than not have a really strong vision of what they want their big day to be. I get really creative couples," she continued.

Zuke herself has been married for almost 11 years, and she and her husband had two failed attempts at actualizing their own dream wedding ceremony.

"In neither case did we really get a wedding that reflected us as individuals and as a couple," she said.

Not long after, she looked into becoming a wedding officiant.

"I happened to be at the right place at the right time so that I could ensure that other couples get the wedding they want the first time around."

But unique weddings are only part of Zuke's unconventionality.

She's also a proud Pagan who, for a number of years, organized the Pagan Pride Days celebration in Sault Ste. Marie.

And although she's happily married, she also has a boyfriend.

She and her husband enjoy a polyamorous lifestyle, and all parties involved are perfectly okay with it.

"I consider polyamory not only a practice, but an orientation," she explained. "In terms of orientation, it's a matter of who you love. But it's also related to how. In my case, I've always been inclined to love more than one person at a time. I just didn't know I could do that for most of my life."

"I often have to correct the notion that [my relationship] is recreational. I'm just not into the recreational thing," she said. "What I have right now are two substantial long-term relationships. I tend to have very long, very serious relationships that just happen to come in numbers more than one."

For obvious reasons, conversations with new potential partners don't open with a declaration of polyamory, Zuke joked, and being comfortable with someone prior to pursuing a relationship is important.

"It can be very impractical when you're in a polyamorous relationship to begin with to meet someone. It can be difficult," she told us. "But part of being poly is developing really strong communications kills. The kind of skills that anybody can use, but are absolutely mandatory when you're dealing with multiple partners. When you're in love with multiple people, you really have to be completely open with them."

Aside from the overt advantages to having more than one serious relationship, Zuke says it's common for polyamorous couples to become very close with each other's partners, developing important and lasting friendships.

In fact, she stood as wedding officiant for her husband's ex-girlfriend.

"The reasons that I've embraced polyamory in my own life are very similar to the reasons that lead me to become a wedding officiant," she said. "Fundamentally, I'm for free choice and finding your happiness. I've found my way to be happy and what I really want when I'm performing weddings is to help other people be happy their way."

One might imagine a lot of raise eyebrows at the revelation that Zuke is a polyamorous Pagan wedding officiant, but she says this is not the case.

"People have a lot of questions for me and that's great. I love answering questions," she explained. "And when people find out I'm poly… I'm surprised a how little hostility I've run into about that. When I started coming out about it, I expected a lot of push back, but people have been very accepting that this is just who I am and what I do. And they're very often curious about it. But at the same time, I'm not interested in making anyone else Pagan or poly. I'm very pro individual choice and people who want to be a thing should be a thing."