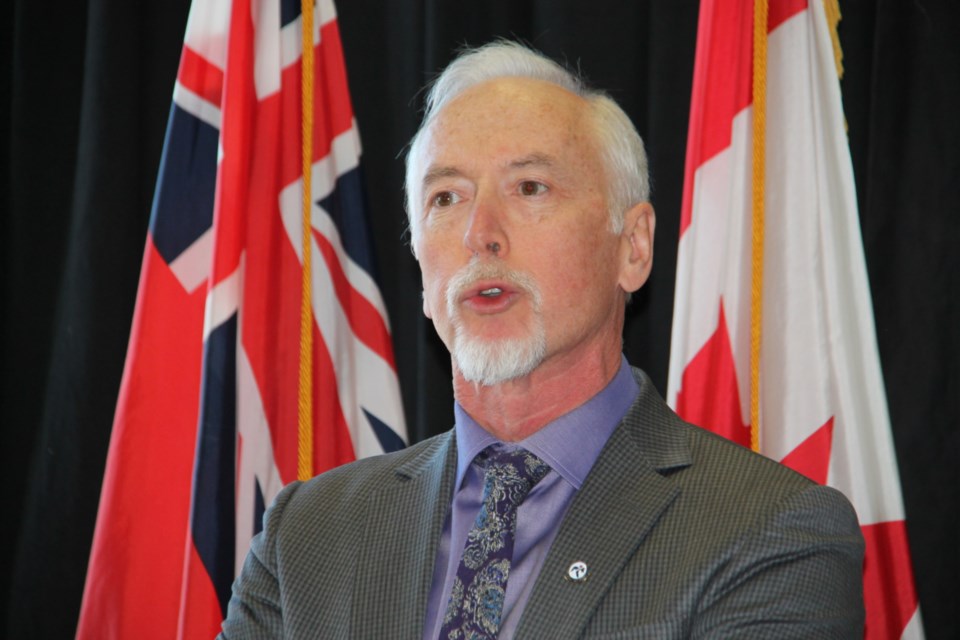 Alan Coutts, Noront Resources president and CEO, speaks at this morning's announcement that Sault Ste. Marie has been selected as the site of the company's proposed ferrochrome plant. Darren Taylor/SooToday

Today's announcement of Sault Ste. Marie's selection as the home of Noront Resources Ltd.'s ferrochrome smelter is just the beginning, speakers said at today's news conference at the Civic Centre.

Numeous other consultations and certifications will still be required before the billion-dollar facility begins production on the grounds of Algoma Steel Inc., probably in 2028.

"It is important to recognize that today's announcement marks the end of one stage of a process and the beginning of another," Mayor Christian Provenzano said today.

"There is still much more work to do, and many things that have to happen before this project becomes an actuality," the mayor said.

"Depending on the provincial decision on road infrastructure to the Ring of Fire, Noront expects that it will begin the work on engineering, environmental assessment and approvals and concurrently will start the community consultation process," the company said in a statement jointly issued with the city and Sault Ste. Marie Economic Development Corp.

"This work will lead to construction of the ferrochrome production facility in mid-2025 at the earliest. It will take approximately three years to build."

The Noront plant will directly employ between 300 and 500 people, along with more than 1,000 indirect jobs created through suppliers and other businesses.

During construction, it will employ up to 1,500 people.

The company says it has sufficient chromite resources in the Ring of Fire to last well over 50 years.

"Current defined resources at the first stage production level would last over 250 years. It is expected that this plant will be in production for the same duration with significant expansion potential."

Noront says it has had an introductory meeting with Batchewana First Nation Chief Dean Sayers and Chief Paul Syrette of Garden River First Nation, neither of which attended today's announcement.

Indigenous communities will be consulted during the environmental assessment, as well as the host community, regulatory agencies and the general public.

Sault Ste. Marie was shortlisted in November 2017 as one of four possible sites for the Noront smelter.

In July, 2018 the field was narrowed to the Sault and Timmins.

"In the final analysis, the net present value of the project was similar at both sites," Alan Coutts, Noront president and chief executive officer, said today.

Dan Hollingsworth, executive director of Sault Ste. Marie Economic Development Corp., said today's announcement was "one of the largest announcements I've been part of" in his 20-plus-year history in economic development.

"This is the largest private investment that has happened in our city in as far as I can remember and I would hazard to say since the time of [Francis H.] Clergue," said Sault MPP Ross Romano.

Romano agreed that there's still a lot to do before the Sault's ferrochrome plant is a reality.

"While a ton of work has been done, this is not the end. This is only the beginning. The road ahead is a long one and there is still a lot to be done," the MPP said.

"When we work together, we succeed," Mayor Provenzano said.

"We have been through a difficult few years. Some of our largest employers have struggled and that struggle has naturally led to some insecurity. We faced that struggle by working together and working through it. We are now very clearly rounding the corner," the mayor said.

"People will naturally and understandably want to know about any impacts of another heavy industrial process in our community. We are committed to working with our community to address any questions it may have. I am confident that we have a partner in Noront that shares that commitment."

"There is potential for many economic synergies through the shared use of assets and services, and we look forward to exploring these options further with Noront, the city and the many stakeholder groups who may be engaged in this project," McQuade said.

Sault MP Terry Sheehan expressed hope that the project will proceed "in a way that will meet truth and reconcilation targets this government has made."

"I know for a fact that the community is hungry for business. At the same time, we're also very conscious that it has to be done in an environmentally sustainable way," Sheehan said.