Look what Michael Burtch is putting in Clergue Park 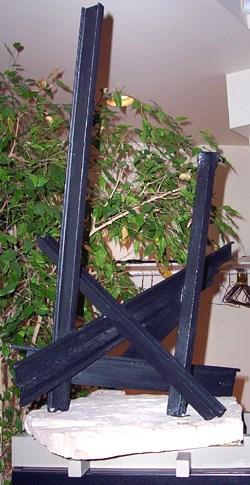 Art Gallery of Algoma got the dirt from City Hall for its latest project.

Sometime late Tuesday morning, installation is expected to begin on Algoma Blue, a large-scale sculpture by Hayden Llewellyn Davies that's being moved to Clergue Park after 20 years at Toronto's Harbourfront.

Because the piece is made from material manufactured at Algoma Steel, Michael Burtch, the gallery's curator and director, strongly feels it belongs in Sault Ste. Marie.

"It even has the Algoma Steel stamp on the metal," Burtch tells SooToday.com.

When he found out the sculpture was available, the curator began orchestrating its homecoming with steely determination.

They'll be installing the sculpture in a hole dug by equipment and backfilled with dirt from the City of Sault Ste. Marie.

The base is designed by Gordon Smedley and built by folks from Steel Speed, A.P.R. Welding Academy and Sault College.

The structural engineering was done by M.R. Wright and Associates Co. Ltd.

What in all probability is the largest physical donation the Art Gallery of Algoma will ever receive was trucked to the Sault by National Transport Inc.

Guy’s Auto Body has been sandblasting and painting the work.

As a final touch, it will be put in place Tuesday using a crane and operator provided by Purvis Marine.

Heralded by many as a master of form and space in three-dimensional art, Davies has produced works that can be seen throughout Canada, the United Staes and Europe.

Algoma Blue is one of five large-scale sculptures completed by the artist between 1979 and 1984.

Some small-scale versions of those works were on display at the gallery from July 29 to September 26, sponsored by Algoma Steel Inc.

Davies names his boyhood home of Wales as one of his primary influences and finds inspiration in the landscape forms as he remembers them.

"These sculptures invite participation of the viewer, since even a slight change in viewpoint results in dramatic changes in the interrelationships of the elements as well as a reshaping of the voids they define," says a media release from the gallery.