Locals use Ritz cracker to look at solar eclipse... and other contraptions (17 photos, video)

Sonja Stadler of the Centre for Forensic Sciences made pinhole boxes, another person brought a colander

Jeff Klassen
Aug 21, 2017 6:33 PM
Previous Next
1 / 1 A Ritz cracker filters the sun to project the crescent pattern of the eclipsed sun onto a piece of paper. A partial solar eclipse peaked at 2:20 p.m. on August 21 in Sault Ste. Marie. Jeff Klassen/SooToday
Expand
Previous Next

At around 2:15 this afternoon, the Centre of Forensic Sciences emptied out, shoved their face into boxes, and stared at the sun — well, a projected fraction of it anyhow.

In parts of North America, the eclipse was total. However, in the Sault, the eclipse covered about 70 per cent of the sun at most.

The city went slightly dark, crescent shaped patterns appeared as projections between leaves, and people stepped outside with homemade and store-bought contraptions to observe the rare astrological event. 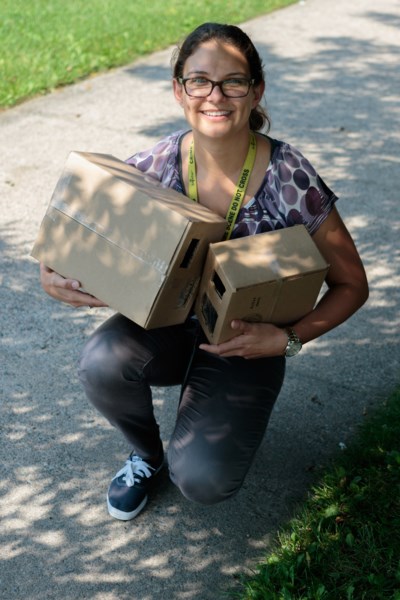 Sonja Stadler poses in crescent shaped patterns created by the solar eclipse as it passes through leaves. In a lab full of scientists and technicians Stadler says maybe she's the 'nerd' and she created pinhole eclipse-viewing boxes to witness the rare astronomical event on Aug. 21, which peaked in Sault Ste. Marie at 2:20 p.m. Jeff Klassen/SooToday

Forensic scientist Sonja Stadler got excited about the eclipse weeks ago.

Stadler bugged all the other scientists and technicians in her lab at Roberta Bondar Place to have a viewing party out front.

So, when the eclipse was about to peak, Stadler stepped away from a DNA analysis project she was working on and, along with the rest of her coworkers, went downstairs to see the eclipse.

Several other offices had the same idea and a 'party' of people gathered outside to see the eclipse.

Stadler made pinhole eclipse-viewing boxes out of cardboard for the occasion and a coworker brought a stick of welding glass.

Other offices at Roberta Bondar Place were using store-bought eclipse glasses, and binoculars with filters to look directly at the sun, while others looked at projected images of the crescent sun using backwards binoculars, and pinhole type devices.

One person even used a colander to project the eclipse while others looked through Ritz and saltine crackers.

Stadler enthusiastically invited people to look through the pinhole viewing-box she made.

'‘Maybe I’m a nerd,” said Stadler. “it’s a pretty rare occurrence. It just shows us where we are in the world. It’s a phenomenon that people have made legends about for thousands of years. Even if we know the science behind it now, it’s still something very cool.”

Stadler pointed out a Native American story about the eclipse that says a bear fought with the sun and took a bite out of it, or the Ancient Chinese legend that the sun was bitten by the legendary dog-like tiangou, or how the ancient Greeks thought it meant the sun was angry with humans.

Stadler said the eclipse is a reminder that all things are interconnected.

“The universe is so huge and we’re just a small part of that. This reminds us of that,” she said. “We see the sun and the moon every day and this is proof that we’re all interacting — we all orbit each other. The moon orbits the earth, the earth the sun, and our solar system is part of the Milky Way.”

Police still searching for accused in Sheguiandah murder
Jul 4, 2022 10:37 AM