Kenny Edwards has been planning for two years to visit Vimy Ridge the World War One battle field
Mar 13, 2017 9:00 PM By: SooToday Staff 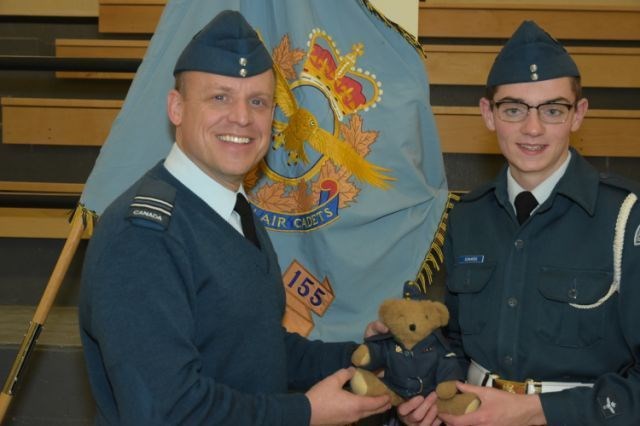 Starting on Apr. 9, 1917 and lasting three days of fierce fighting to win the high ground that many say brought Canada together as a nation. He has been reading many books and articles as well as documentaries on this famous battle that saw over 3,500 Canadians killed and 7,000 casualties to take a ridge that both English and French forces were unable to capture previously.

Kenny has been working part time and he commends his parents for helping as well to pay for a nine day EF Tours trip that will take him to see the sights of London, WW I Battle Fields of Beaumont Hamel, National Canadian Vimy Memorial among others, WWII Normandy, Juno Beach and Paris.

He states that he is really looking forward to seeing Vimy Ridge while taking in the view of the battlefield and the monument dedicated to the sacrifices of Canadians during the First World War.

On his last Wed. training night at the Sault Ste Armoury before leaving on his trip Kenny who holds the rank of Sgt. was asked if he would take along the 155 Squadron’s Mascot, Leading Air Cadet Bear. LAC Bear has already been to Europe twice, once when he accompanied WO1 Max Warren for an Air Cadet Europe Exchange and then with F/Cpl Alyssa Dupuis on a Rotary Exchange.

This will be LAC Bear’s first Battle Field Tour and this will add to the training experiences that the mascot has already brought back photos from other trips and projects to help educate the cadets of the 155 Squadron.

Kenny is accompanied by Lt./Commander Rob Pihlaja, Area Cadet Advisory, along with Staff and Sea Cadets from 101 Tiger Sea Cadet Corps, Timmins who are also participating on the Vimy Pilgrimage.

They have already spent two days in London seeing the important sights, Buckingham Palace, Big Ben and Westminster Abbey to name a few. One his third day they will travel to the Vimy Region after taking a ferry across to Calais France.

Here is a quick update on his trip while in London Kenny saw Big Ben, “This place was on my list of attractions I wanted to see”. At Westminster Abbey “going to see a Church that represents a lot of British history is very impressive.”

“In my photo at the Abbey is, Jamie Dumas, Valerie, myself and LAC Bear Sean and Tysen Sparling”. Everyone else in the photo are Sea Cadets from 101 Tiger in Timmins. In all, London was a very amazing, I would highly recommend visiting there for the great culture and the famous attractions and the overall atmosphere. Hopefully I will be able to travel back to London in the near future. I now move closer to Vimy by leaving London behind and traveling to France.”

The 155 Sqn. trains Air Cadets, boys and girls, 12 to 18 years of age in the area of aviation in class and through hands on training using flight simulators and at the Canadian Bushplane Museum in Aircraft Maintenance from qualified instructors.

The training takes palace on Wed night at the Sault Armoury on Pine Street. There is no cost to join, participate in regular training or for uniforms. The 155 Sqn is celebrating their 75th year and will be hosting alumni on the weekend of May 5 to 7 with many events to mark this important milestone.

The 155 is sponsored by the Sault Ste Marie and District United Way. To learn more about the 155 Sqn and the many fun activities that the cadets take part in please visit, www.155aircadets.ca.