Christmas Day was the 40th anniversary of the birth of Iron Maiden, one of the most influential bands in heavy-metal history. 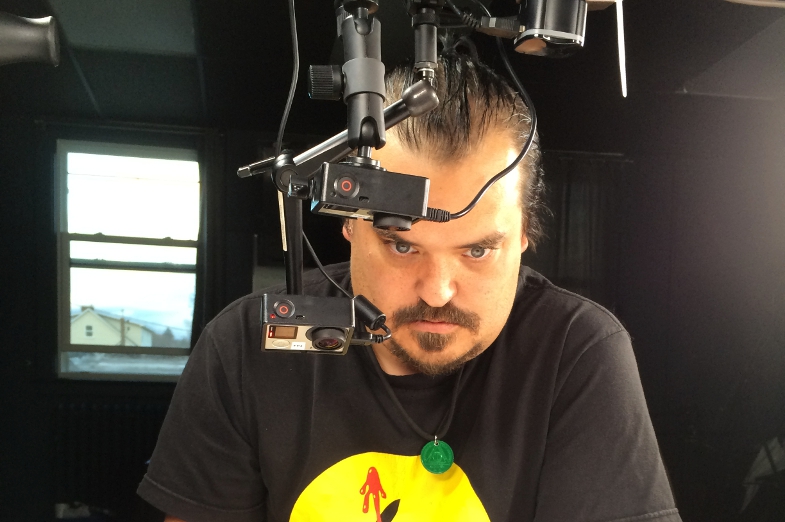 Christmas Day was the 40th anniversary of the birth of Iron Maiden, one of the most influential bands in heavy-metal history.

It was a less auspicious occasion for Darren Emond, the 38-year-old Saultite recently picked as the latest artist to draw Iron Maiden's iconic comic book.

December 25 was the first anniversary of Emond's last drink.

Actually, Emond has been sober for eighteen months.

He was doing so well through much of 2014 that he thought he could handle a single drink to celebrate the holiday.

He ended up in hospital.

So Emond calculates his time of sobriety from Boxing Day, 2014.

He recently celebrated his first year of recovery with family and friends, including his 12-step sponsor, who brought a cake.

"Sault Ste. Marie saved my life," Emond tells SooToday. "The people I met in the program are the most wonderful human beings that I know."

"I could claim 18 months of sobriety with a slip. But I want to be intellectually honest. So it's one year."

Whether 12 months or 18 months, Emond's return to healthy living hasn't removed a decidedly dark cast from his art.

From his earliest years as a kid in Wawa, he was drawn to horror, science fiction and comics.

"I moved to the Sault when I was 18. I moved here because there was only one art class in the entire high school in Wawa."

"It was like a Grade 10 general course. And the art teacher was an [uncomplimentary noun removed by SooToday]. I moved here because I could take a more advanced high-school-level art class."

He quickly concluded that his dark aesthetic and insistence that the sequential art in comic books should be taken seriously weren't a good fit at Cambrian.

"I fought kicking and screaming. I barely graduated. I still consider myself to be mostly self-taught."

Emond doesn't mean that as an insult to his professors at Cambrian.

He actually found one or two instructors there that he got along with.

Some came close to being mentors.

'Couldn't stand anything by the Group of Seven'

"I got exposed to a lot of Canadian art in the college and try as hard as I could, I just could not care less. It did not interest me in the slightest."

"I don't particularly like landscapes. The Canadian art scene is dominated by landscapes. The only real artist that was Canadian that I connected with was Paul Peel because he did anatomy. But he painted kids and I wanted more athletic fantasy-type physiques."

And to Frank Frazetta.

Frazetta was a legendary fantasy artist known for his work on movie posters, book covers and comics including Buck Rogers, Flash Gordon and Vampirella.

"In today's day and age, for me, there was nothing better than Frank Frazetta," he says. "The anatomy - that's the kind of stuff that I fell in love with."

After "barely graduating" from Cambrian, it didn't take long for Emond to find his niche.

He'd been volunteering at the Art Gallery of Sudbury and quickly landed steady work there teaching art classes for two years.

He then moved to Montreal and continued to do well, combining commercial art and portraiture with gigs as a magician, working all the time on indy comics.

"Alcohol took to me really, really well," he says.

"My wife left me. I couldn't get work because my hands were shaking. Lost everything that I had. I had no money. I was sleeping on park benches. Just killing myself with alcohol."

Rotgut consumed a decade of Emond's life, from his mid-twenties to mid-thirties.

"My body was shutting down. I was having grand mal seizures every single day."

"I would just drink and drag myself to the bathroom. I had a bucket to throw up in because I couldn't make it to the bathroom. That was my life. I was given two months to live by my doctor."

If he was going to die, Emond figured that would best be done in Sault Ste. Marie.

His family made a basement apartment for him and brought him home on the Greyhound.

The Sault: a big rehab town

Emond didn't know it at first, but the Sault is one big rehab town.

He decided to give it a try.

Here's his description of what happened: "On the fifth day of detox, I fell down on the kitchen floor. I had a grand mal seizure, nearly bit off my tongue. I was pronounced dead. It was four and a half minutes. They brought me back in the ambulance by shoving a tube down my throat and filling me up with oxygen. Then I came out of it and they strapped me to a gurney for three days because I was seizing so bad. They told me I had been dead. I wasn't breathing. My heart had stopped. I was a stiff for four and a half minutes."

"That started a long road of recovery. Two rehabs, one in North Bay, one in Timmins. I had a couple of relapses. It's a thousand times more difficult than anything I've had to do."

"I'm an actual zombie now, because I'm back from the dead. I don't eat brains."

Over the past 18 months, things have turned around for Emond.

He meets nightly with his 12-step recovery group.

He got a government grant to help him set up shop again in the Sault.

Emond is pictured above working on a recent animation project for Village Electric, a sister company of SooToday that operates Northern Ontario's newest multimedia production studio.

He's been reconnecting with comics artists he knew from his Montreal days:

"Darren came by my table at Toronto FanExpo this September and brought new samples," Isherwood tells SooToday. "They looked much better....He had taken great strides forward."

Isherwood was then approached by Mel Smith, owner of Orinda, California-based Acme Ink, which publishes a number of rock biography comics including Iron Maiden.

"I had too much work to draw it all, but I felt Darren might be right for the pencils," Isherwood says. "He jumped at the chance, as you can imagine."
"So far we're almost done the cover. And he's done a fine job on the interiors so far on a tricky job to handle. But seeing how he turned his life around and improved so much, I felt he deserved a shot."
So Emond's initial sketches are being inked by Isherwood, who's also colouring the cover and doing tones on the interior pages.
Back flips

"I was doing back flips," Emond says. I owe this dude a lot. He got me the job. He's mentoring me. He's looking out for me. He knows the ropes."

"I tell any artist that the reader doesn't know the life circumstances of the artist," Isherwood says. "So if they went through hell to get where they are, it will not matter if the work suffers. However, knowing Darren for many years I was happy to call his number. I have many students who are close, but Darren was better."

For almost as long as heavy metal music has existed, there's been an unholy alliance with comics.

In 1977, Marvel published a notorious KISS comic whose red ink contained blood from each of the band's members.

"We got into a DC3, one of those big prop planes, and flew up to Buffalo to Marvel's printing plant, where they pour the ink and make comic books," said Gene Simmons. "A notary public actually witnessed the blood being drawn."

Many other bands have used album cover art by comic book artists.

"A lot of metalheads feel like or have been treated like outcasts, which is how a lot of comic book characters start out as at the beginning of their journey, so we find them relatable,” Kelli Malella, publicist for Metal Blade Records, told Vice's Jeff Treppel earlier this year.

"Young metalheads can relate to nerdy Peter Parker, put-upon Kamala Khan, and mild-mannered Clark Kent. But listening to the music allows them to imagine that they’re Spiderman, Ms. Marvel, or Superman. Both species of fan tend to be misfits or outcasts, and so they gravitate towards things that appeal to misfits and outcasts," Malella said.

The Iron Maiden comic that Emond is drawing will be published as the band embarks on its Book of Souls World Tour, expected to include concerts in 35 nations including first-time visits to China, Lithuania and El Salvador.

The band will travel in a Boeing 747-400 jumbo jet piloted by Iron Maiden frontman Bruce Dickinson.

As for Emond, he has another comics project lined up after this one.

"I'm working on a book in the new year called Giiwedanong, with local writer Darin Corbiere," he says.

The graphic novel will focus on the Anishinabek creation story,

It will be funded through a Kickstarter campaign.