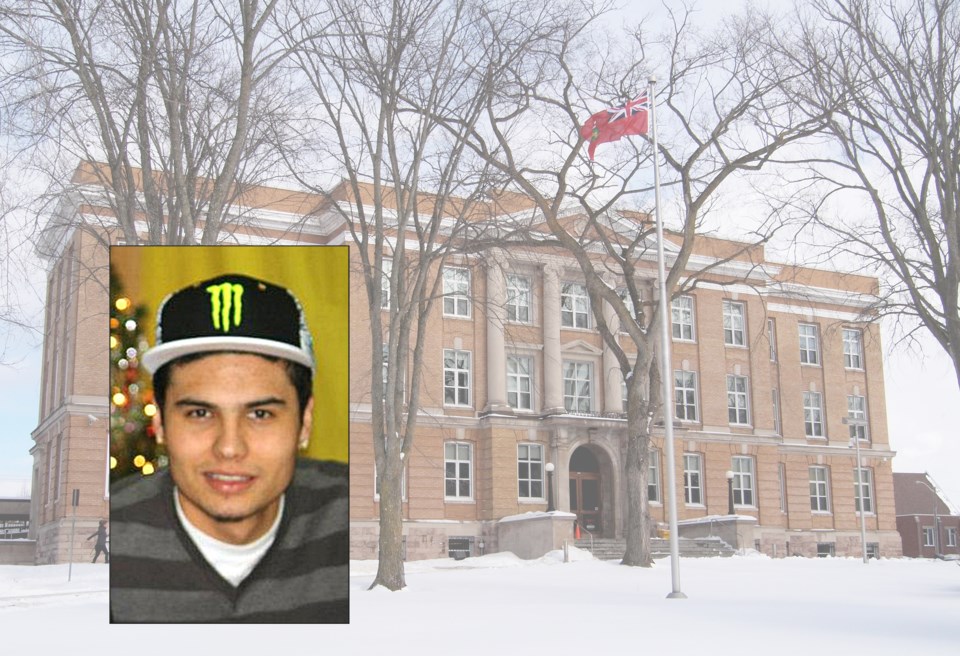 Terry Mosher's Charter rights were violated by Ontario Provincial Police officers investigating the death of a young man whose body was discovered on the highway in Garden River nearly three years ago, his lawyer argued Tuesday.

Mosher, who now resides in the Sault, reported coming upon Roach, 22, on the roadway about 500 metres west of Bell's Point Road in the early morning hours of October 13, 2013.

In video interviews with police, shown in court during a voir dire on a defence Charter of Rights challenge, Mosher said he saw something on the highway, swerved, stopped and realized it was a person, then drove to the Husky truck stop to contact police.

"I definitely did not knock that man down and kill him," he insisted in an October 16 interview with now-retired OPP officer Steve Gjos.

"If I hit him I would have heard a thump or something," he said, adding that he may have clipped the man's body as he swerved to avoid it.

"Honest to God, it was down before I got there. If he was standing up I would have seen him but he was already flat out on the highway."

Mosher said he may have caused further damage to the body, "but someone else put him there. I think the damage was done long before me. I feel rotten about this."

During the interview, Gjos repeatedly told Mosher that it was an accident, that he had done the right thing by stopping, reporting it to police and then returning to the scene and putting his flashers on until officers arrived.

But, he also repeatedly questioned Mosher about what he had done when he arrived at the Husky, explaining a video showed he and his wife getting out of their vehicle and examining the front of the van.

"I don't recall doing that," Mosher tells him a number of times, before saying "I feel like you guys are blaming me."

Ontario Court Justice Romuald Kwolek heard that two officers had gone to Mosher's home on October 16 to examine his vehicle and had him sign a consent to search form, which covered a time period of 11:15 a.m. to 11:45 a.m. that morning.

The officers examined the van, discovered some old damage, but couldn't find any evidence it was the vehicle involved in the accident.

They then received a phone call from another officer, who had viewed the Husky tape, telling them to seize the vehicle and bring it and Mosher, to maintain the consent search, to the Sault detachment.

There was a delay in transporting the van on a flat bed truck, and it didn't arrive at the OPP forensic garage at the detachment until after 5 p.m. and the search didn't take place that day.

On the morning of October 17, Mosher was brought back to the detachment, where an officer had him sign another consent form.

The search began with the van on a hoist, but was abruptly shut down when a forensic officer noted organic material on the bottom of the vehicle, and he stopped the examination so they could obtain a search warrant.

Later in the day, police were told by the Crown's office that they weren't going to be able to get a search warrant and to proceed with a consent search.

On October 18,  an officer called Mosher to tell him they were going to continue under a consent search. He agreed and the vehicle was examined that day.

On Tuesday, defence lawyer Ross Romano maintained that his client's rights to be secure from unreasonable search and seizure were violated.

He told Kwolek that Mosher didn't understand the consent process and the potential consequences he faced.

Romano suggested there was a great deal of political pressure on the OPP to get answers for the Roach family and the Garden River community.

And after Det. Sgt. Robert Fremlin, lead investigator on the case, viewed the Husky video he had the other officers seize the vehicle, because the investigation's "fishing line snared somebody and reeled it in," he said.

The defence argued that in more than five hours of video of the police interviews with Mosher that were seen by the court, there's never any discussion that indicates his client understands the process to establish a proper consent.

"We have no evidence here at any point that Mr. Mosher understood what his rights were."

Crown attorney Kelly Weeks countered that Mosher's rights were not infringed upon, that there was a voluntary consent and no coercion, that he was aware of his right to refuse and also was aware of the consequences of giving consent.

During the police interviews, Mosher made it clear he was repeatedly told he could stop the process, shut it down at any time, she argued.

And when he's at the detachment, Gjos exhaustively goes through a number of things to make sure he understands, Weeks said.

"He's been repeatedly told what his rights are and he makes it clear he understands in the answers and responses he gave to Gjos," the prosecutor told the judge.

Weeks said Mosher signed two consent forms and acknowledged in a phone call, where he was reminded of his rights, that it was okay to continue the search consent on October 18.

"There is no requirement that consent be in writing."

Mosher knew of the potential consequences, that something had been found on his vehicle, she suggested, and "is clearly aware there can be criminal charges . . . he's aware of that because he says it from time to time."

On the afternoon of the October 18 search, the owner of a garage Mosher had taken his vehicle to after the incident, was interviewed and police were told the man observed damage to the undercarriage of the van.

He asked Mosher "what did you hit," a question Mosher didn't answer, Weeks said.

As a result of that information "things crystallized" in Fremlin's mind about a potential charge of obstructing police, because of suspicion of involvement in the incident or that Mosher might be lying, she said.

Kwolek will give his decision on the Charter application by April 4, a week before the trial is scheduled to resume.